The bitcoin price is at risk of a swift and painful reversal after its parabolic move to $13,868. That’s according to veteran trader Peter Brandt. Brandt says the worst-case scenario is an 80 percent retracement from the 2019 high, implying a fall below $3,000. This bearish scenario would come into play if bitcoin breaks the current parabolic pattern.

“If current parabolic phase is violated, we could expect either an 80% correction of 7-month advance or much smaller correction w/ definition of new parabola w/ shallower slope.” Most analysts agree that bitcoin has entered a healthy breathing period and may temporarily dip lower, but Brandt’s assessment is particularly brutal. 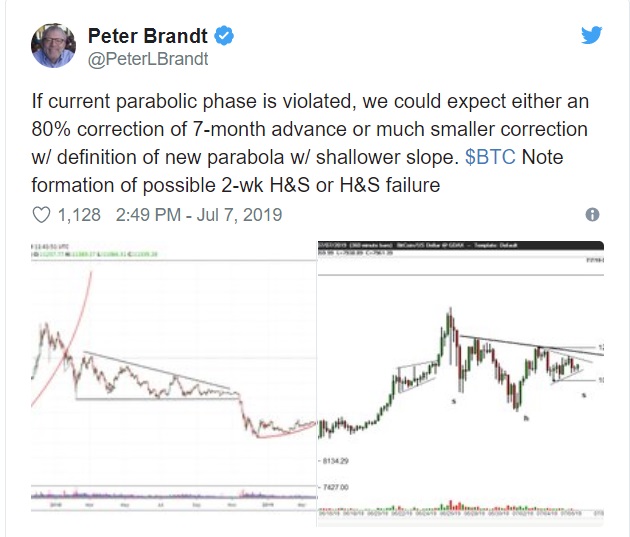 But is an 80% crash realistic? Brandt explains that bitcoin’s recent 30% retracement is “mild” when looking at historical pullbacks. Indeed, the bitcoin price experienced nine major corrections in the last bull market.

Undoubtedly, bitcoin is in a cooling-off period which is healthy after the explosive rally. Trader Josh Rager suggested that bitcoin will likely range for a while, but he sees some downside in the short-term. Mati Greenspan, senior analyst at eToro, points to the formation of a flag pattern on the four-hour bitcoin price chart. This pattern typically indicates a period of price consolidation before an explosive breakout higher or lower. This break will dictate whether bitcoin goes on to test 2019’s high or collapses back below $10,000.