Bitcoin hash rate has collapsed by 39% from all-time high 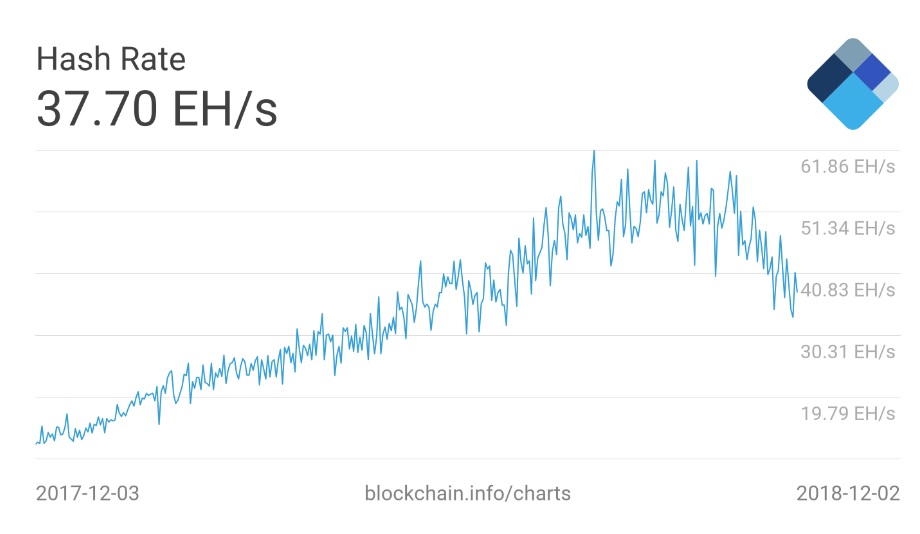 The crypto market’s prolonged decline has finally begun to manifest in the bitcoin mining industry, which had at times seemed impervious to falling prices but is now experiencing a moderate exodus.

At a basic level, miners produce Bitcoin blocks by competing to solve complex mathematical problems. When the hash rate increases, blocks are found more quickly, while the converse occurs when the hash rate declines. To maintain a consistent block time of ~10 minutes, Bitcoin automatically adjusts the difficulty of these problems at roughly two-week intervals to account for new machines entering or exiting the network.

For years, the difficulty has almost exclusively increased, as a general price uptrend coupled with rapid advancements in mining technology has resulted in sustained hash rate growth, even during periods of negative market trajectory. However, nearly one year into a bear market that has seen the bitcoin price fall more than $16,000 from its all-time high, that is no longer true.

As CCN reported, the Bitcoin hash rate has been in decline since mid-October, as falling prices hastened the rate at which older miner models became obsolete and profit-driven firms at the margins began to turn off their machines to avoid operating at a loss. One estimate pegs the average cost of producing a new unit of BTC at $4,500, a mark BTC has generally traded below since Nov. 20, though the hash rate began to decline about one month prior.

This miner exodus is now being reflected in Bitcoin’s network difficulty, which fell by more than 15 percent following the regular difficulty adjustment that occurred earlier today. According to data compiled by XDEX Chief Analyst Fernando Ulrich, this constitutes the second-largest difficulty drop in Bitcoin’s decade-long history and the largest since Nov. 1, 2011, when the difficulty dropped by 18 percent.

Today’s difficulty adjustment marked the second-consecutive decrease, with the difficulty dropping by 7.3 percent on Nov. 18. That decline was notable in its own right, as it marked the largest decrease in around six years and currently ranks as the 10th-largest drop overall.

Prior to Nov. 18, the last time the difficulty decreased was on July 15, and such decreases have been a rare occurrence over the past several years. At a present value of 37.7 EH/s, the BTC hash rate is down 39 percent from the single-day high of 61.9 EH/s it set in late August. It is also down approximately 31 percent from the weekly average peak it set on Oct. 1.