Home › Market Overview › Bitcoin (BTC) can collapse to $1,700: the charts are sounding the alarm

Bitcoin (BTC) can collapse to $1,700: the charts are sounding the alarm 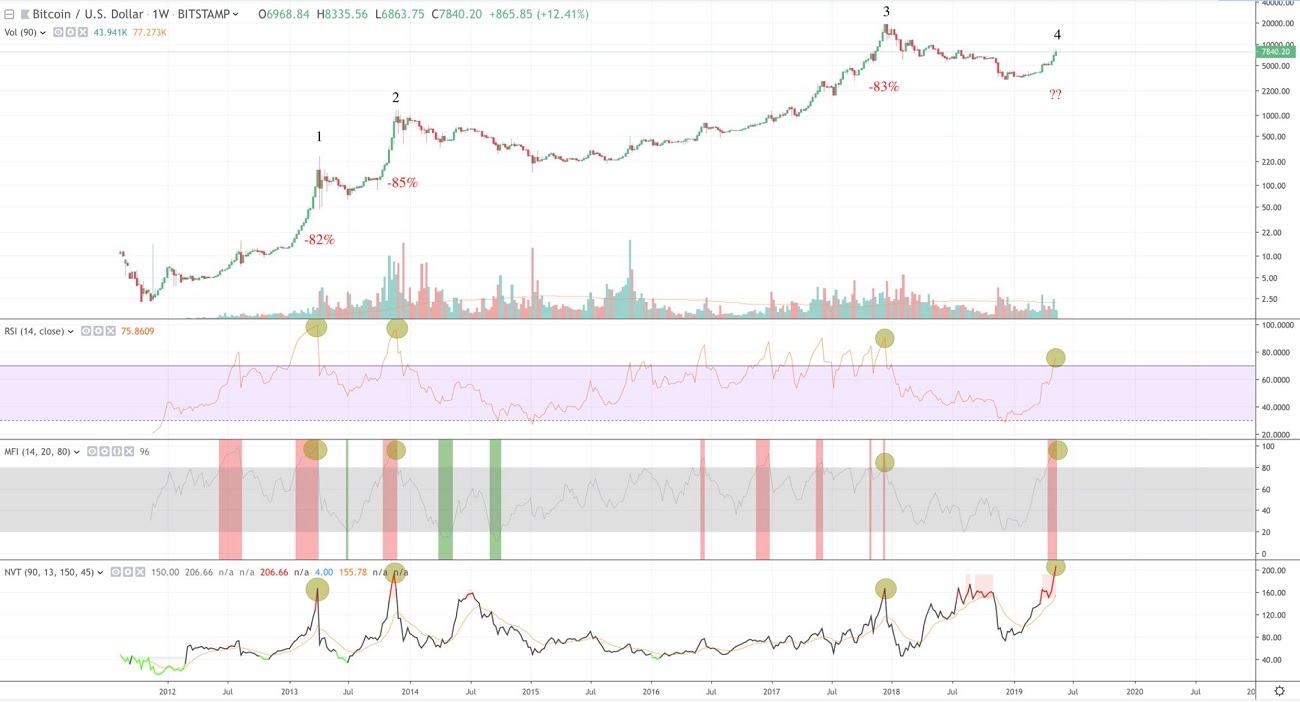 According to “HiThrowaway”, Bitcoin (BTC) is looking like it is on the verge of a potential drawdown. In a recent tweet, the trader noted that the last three times the asset’s one-week chart looked as it does now, 82%, 85%, and 83% drops were seen. More specifically, the last times the Relative Strength Index (RSI), Money Flow Index (MFI), and the Network Value to Transactions Ratio (NVT) sat at current levels, BTC fell dramatically.

He isn’t wrong. As seen in the charts below, when the three indicators reached “oversold” levels, as they are now, collapses followed a parabolic rally, like the one just seen. If an 80% decline is seen here, BTC would fall to the $1,700 range. Ouch.

Throwaway isn’t the only one currently bearish. In a recent TradingView analysis, the ill-titled “Magic Poop Cannon” suggested that Bitcoin is “WAY overbought”, with one-day RSI passing 87. He didn’t give an exact price prediction, but noted that “when the correction comes, it’s probably going to be more violent than this parabolic rise.

As we reported earlier today, CNBC analysts have also suggested that a short-term pullback is entirely possible. In a “Futures Now” segment aired on Thursday, Anthony Grisanti of GRZ Energy suggested that Bitcoin failing to hold well above $8,000 for a serious stretch of time is not the best sign.

While the aforementioned analysts seem to be convinced that a drawdown is in Bitcoin’s near-term future, some are still entirely optimistic. As Ethereum World News reported the other day, Josh Olszewicz of Brave New Coin suggested that Bitcoin’s one-week chart Ichimoku Cloud, a series of indicators meant to show support, resistance, trends, and momentum, is currently showing that the asset is in clearly bullish territory. He notes if BTC manages to break above the “Kijun” line of the cloud, BTC could move to $10,000.