Wild Stock Market Has a Bottom. That’s When the Panic Really Begins

We’ve just witnessed the fastest crash in the US stock market history. Followed by one of the sharpest spikes back into bull market territory. So what happens next? No-one knows for sure. JP Morgan thinks we go back to all-time highs this year. While some doomsday analysts are calling for another 70% drop.

In the near-term, however, Fidelity analyst Jurrien Timmer is watching one crucial level: 2500-2600 on the S&P 500. If this stock market level gives out in the coming months, we’ll almost certainly see a retest of the March 23rd lows. And we may even collapse under it. This isn’t some arbitrary number that Fidelity has picked. According to Timmer’s model, 2,500 is where investors are pricing in a ‘U-shaped recovery’ of the economy. The higher stock market level we’re at right now, he says, is signaling a more optimistic V-shape recovery – a level many think is unrealistic. 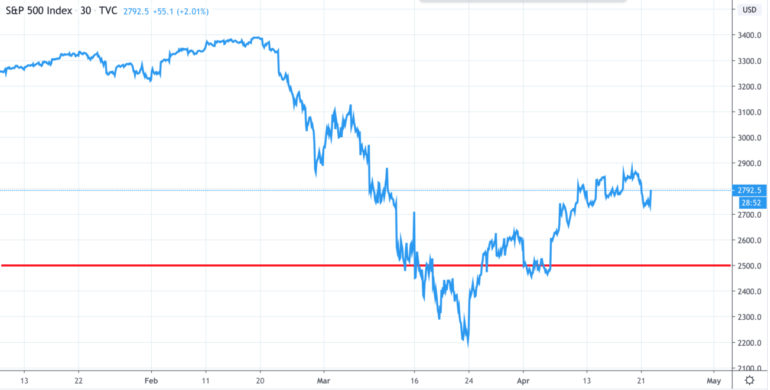 Now we’re at this important test if you will. We’re at those levels where if you’re a bear, you’re probably going to sell here. So 2900 or so on the S&P… that price is, by my math using the discounted cash flow model, is in a V-shaped recovery. A U-shape is about 2500. He believes we are now entering a less volatile trading range. The S&P 500 should now swing between 2,500 and 2,900 depending on investor sentiment.

But if we lose 2,500, it suggests a much longer, much deeper economic crisis. Mike Wilson, chief investment officer at Morgan Stanley tends to agree. The level he’s watching is 2650 with a view to buying aggressively. And he doesn’t think we’ll see new lows. We are buyers of this dip. We think it will be shallower than what maybe some people are thinking… Our view right now says we shouldn’t pull back further than 2650. He said this coming quarter will be the worst, but the market has already priced it in. From here on out, the quarter will be “less bad” and ultimately return to growth next year. He’s also bullish on the economy re-opening.