Why I Am Cynically Bullish About the Bitcoin Halving

Historically, miners have had the most control over Bitcoin’s circulating supply, as they have control of the faucets. Just like OPEC back in the day, the suppliers of Bitcoin have been able to influence its price in the market by controlling the supply and holding Bitcoin until the price is right. To understand the power Bitcoin miners hold on its price, we must look at the ratio of existing supply to new supply through the following: dS divided by S. 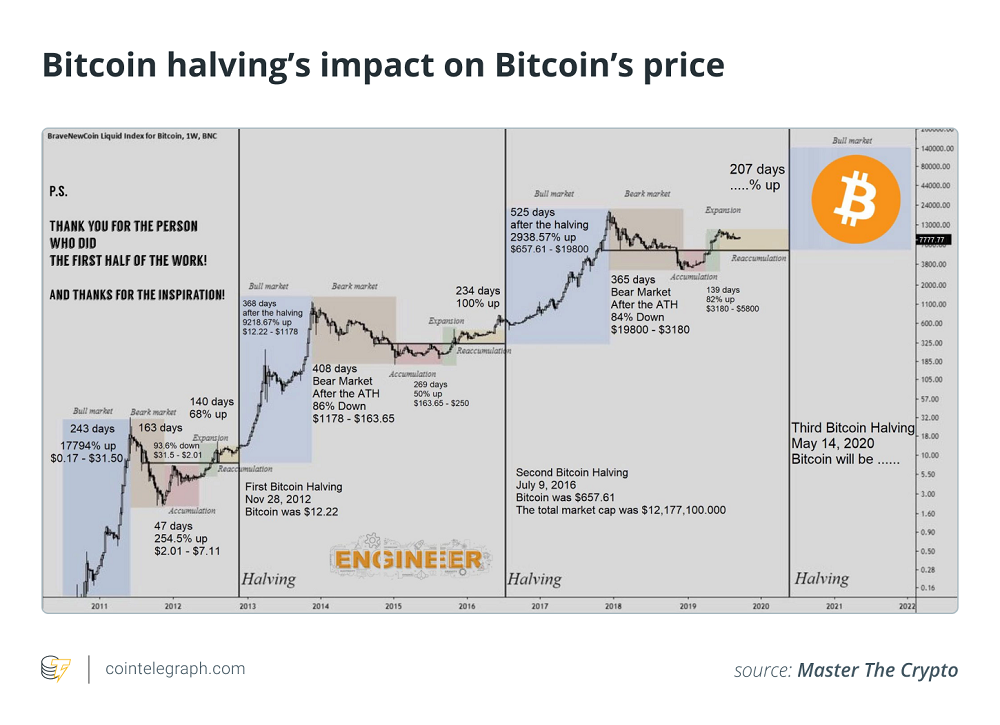 The main argument of Bitcoin bulls is that every other halving has led to an increase in price. Per the chart above, miners need to cover both their doubling costs and their fixed costs. As a result, they will hold and limit new Bitcoin supply until the price is right to cover these costs. This requires treasury, influence and patience. Arguably, miners have all three.

However, if you follow the math, the dS–S ratio started at infinity (10 million divided by zero) and it will end up at zero (almost zero divided by 21 million). This ratio moves toward zero as each halving happens. When the ratio is high, a highly correlated group of miners can dictate the price — just like how OPEC was able to dictate the price of oil in the 1970s. But when the ratio is zero, miners have no power and can no longer dictate the price of Bitcoin. This is akin to Iraq throwing a tantrum over the one barrel of oil it has left when the United States is awash in cheap gas power and nuclear abundance. In other words, what miners want does not matter.

In addition, the price dictated by miners is led by sunk cost, as the Bitcoin has already been mined. If the price of Bitcoin goes below the cost to mine it, the whole system would experience tremendously swift, possibly catastrophic changes.

The theoretical argument here is straightforward: There is an inflection point at which the holding of Bitcoin by miners will not matter at all. The trend of price manipulation by miners should buckle at this point and possibly inverse. We like to call this point of inflection “peak Bitcoin.” The only question is when this will happen.

At this point, it may sound like we’re bearish on Bitcoin, but that is in fact untrue. We’re bullish, although a bit cynical, and this is why:

There is still a lack of understanding from the general population on how this all works. A naive green mixed with financial illiteracy still runs the crypto markets. Also, most Bitcoin maximalists are lemmings with almost no regard to the technicals and limitations behind the asset.

As we know, the price of Bitcoin is almost purely psychological. The momentum of the crowd still continues to drive the price upward, and there’s no point in fighting against it. But at some point, the influence of the halving will disappear. And at that point, we will be left with nothing but a supply-side cost shock. And unlike oil, which is fundamental to the functioning of modern society, Bitcoin is not.

So, what’s to be done? Investors must hedge by looking for other types of crypto assets that are uncorrelated to the price of Bitcoin. There are hybrid stablecoins that are emerging. These hybrid stablecoins are able to hold steady in price without being pegged — and influenced — by fiat currencies, and some may even have incrementally accretive value.

So far, Bitcoin has provided a safe harbor for crypto and represents about 65% of the overall crypto valuation. However, Bitcoin’s dominance may also cause catastrophic damage if the price moves downward. There is an urgency in finding some alternatives to Bitcoin. Should we see the price move sideways at a halving, that should be the canary in the coal mine (pun intended), and few miners will survive its operations. At that “peak Bitcoin” point, we will have three years to find alternatives before the entire cryptocurrency market implodes. Crypto will need to find a way to survive without so much dependency on Bitcoin.

Oil surges 20% in fifth straight day of gains on demand recovery and production cuts, CoinTelegraph, May 5