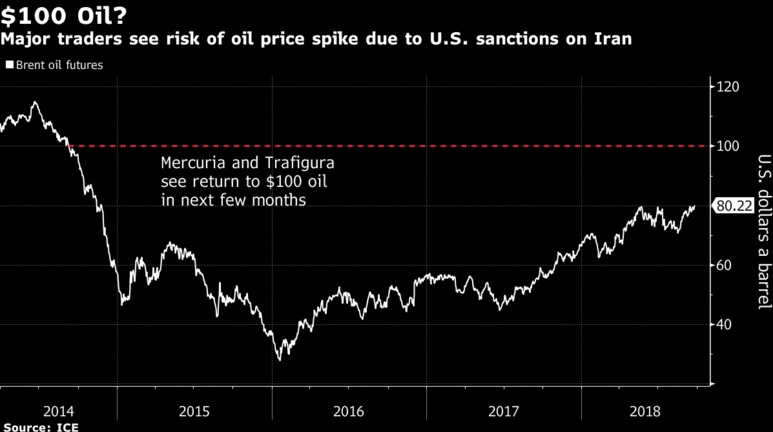 Rising oil prices are prompting forecasts of a return to $100 a barrel for the first time since 2014, creating both winners and losers in the world economy.

1. What does it mean for global growth?

Higher oil prices would hurt household incomes and consumer spending, but the impact would vary. Europe is vulnerable given that many of the region’s countries are oil importers. China is the world’s biggest importer of oil and could expect an uptick in inflation. For a sustained hit to global growth, economists say oil would need to hold above $100. The dollar’s gain of this year doesn’t help though given crude is priced in greenbacks.

Bloomberg Economics found that $100 oil will do more harm than good to global growth. Yet there are important differences in the condition of the world economy today compared with 2011.

3. How will Iran and Trump impact the market?

4. Who wins from higher oil prices?

Most of the biggest oil-producing nations are emerging economies. Saudi Arabia leads the way with a net oil production that’s almost 21 percent of gross domestic product as of 2016 — more than twice that of Russia, which is the next among 15 major emerging markets ranked by Bloomberg Economics.

India, China, Taiwan, Chile, Turkey, Egypt and Ukraine are among the nations who would take a hit. Paying more for oil will pressure current accounts and make economies more vulnerable to rising U.S. interest rates. Bloomberg Economics has ranked major emerging markets based on vulnerability to shifts in oil prices, U.S. rates and protectionism.

6. Will it lead to higher inflation around the world?

7. What does it mean for central banks?

If stronger oil prices boost inflation, central bankers on balance will have one less reason to keep monetary policy loose. Among the most-exposed economies, central bankers in India already are warning about the impact as the nation’s biggest import item gets more expensive.

What Oil at $100 a Barrel Would Mean for the Global Economy, Bloomberg, Oct 01
Article Rating
Related Articles