Unemployment rolls continued to swell in the U.S. last week, though jobless claims hit their lowest level since the economy went into lockdown made to battle the coronavirus pandemic.

First-time filings for unemployment insurance hit 3.17 million last week, bringing the total to 33.5 million over the past seven weeks, the Labor Department reported Thursday. The total was slightly higher than the 3.05 million expected by economists surveyed by Dow Jones and below the previous week’s 3.846 million, which was revised up by 7,000. 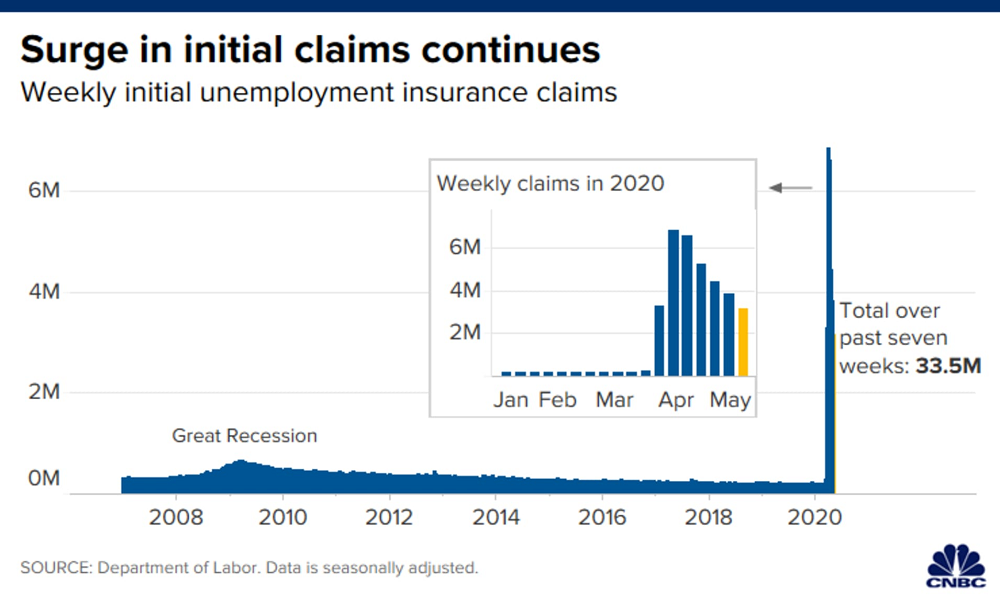 Though the numbers remain stark, it was the lowest total since the second week of March, shortly after the World Health Organization declared the coronavirus strain a pandemic. Stock market futures reacted little to the data and continued to indicate about a 300-point gain at the open for the Dow Jones Industrial Average.

The four-week moving average, which smooths volatility in the numbers, slid to 4,173,500, a decrease of 861,500 from the previous week’s average and a further indicator that the worst of the jobs news may be over. Numbers not adjusted for seasonality showed a total of 2.85 million claims, a decrease of 646,613, or 18.5%, from the previous week. Some economists think the unadjusted numbers are more relevant for the current unprecedented situation as they are not as affected by seasonal factors.

The layoffs associated with social distancing practices have wiped out all of the job gains the economy has seen since the recovery from the Great Recession. The latest jobless claims numbers come a day before the Labor Department releases its nonfarm payrolls report for April. Economists surveyed by Dow Jones expect a plunge of 21.5 million, easily the worst month in U.S. history, with the unemployment rate surging to 16%.