Home › Daily Outlook › US sets the tone for market dynamics

US sets the tone for market dynamics

NFP turned out to be much higher than the markets (180K) and ADP (67K) expected – at 266K. Politicians will undoubtedly present these results as their achievement. Such a strong report also justifies the course of monetary policy and creates room for maneuvers. However, it is worth mentioning that GM workers, who returned after the strike, contributed significantly to such positive data. The unemployment rate fell from 3.6% to 3.5%, reaching the lowest level in 2019.

However, manufacturing and inflation in the U.S. continue to be of great concern to the markets. Trump’s decision on a trade war with China will be very important now. Both sides are interested in a truce and easing rhetoric. If the U.S. president gives the markets tangible hope for a resolution of the situation, consumer demand and manufacturing will support stock indices, keeping the economy from a downward spiral. Economic data from the U.S. may also have a corrective impact on the assessment of the situation. This week the Consumer Price Index (CPI) is published, as well as retail sales data. These indicators are the most important components of the monetary policy, affecting the price dynamics of the dollar.

The meetings of the major central banks – the Federal Reserve and the ECB – are in the spotlight this week. The U.S. Central Bank will hold a meeting on Wednesday, which will result in a decision on interest rates. In the current optimistic conditions, the markets are set to pause with interest rate decisions. Analysts will also be waiting for the comments of Jerome Powell during the press conference.

ECB will announce its decision on the rate on Thursday. It is unlikely that the new head, Lagarde, will announce any changes in policy. Lagarde is very pessimistic about the current economic situation in the currency block. Any positive comments, as well as a lack of intentions for further policy easing, may support the euro. 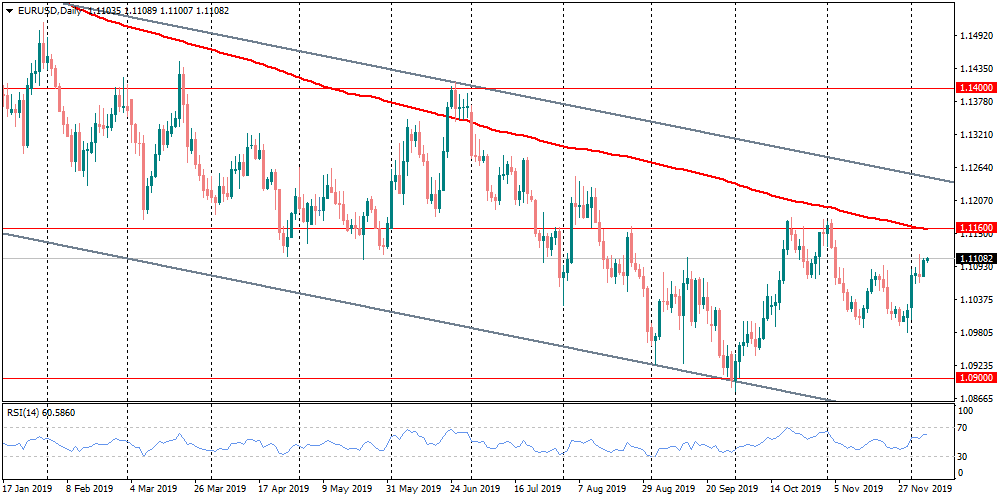 As for Britain, the main focus will be on the parliamentary elections that will be held on December 12. The results will have a direct impact on the prospects of Brexit, as well as the pound and the euro. All parties are extremely exhausted by this process, so the confident victory of Boris Johnson will be a breath of fresh air. The main focus now is on a “civilized divorce” with a deal in the end.

New data from Baker Hughes on the number of active drill rigs in the U.S. showed their decline from 802 to 799. Saudi Arabia has demonstrated its willingness to support the production limit, even without an agreement in the OPEC + at this stage. In the FxPro analyst team’s opinion, markets did not expect such an outcome, which put pressure on oil, much would depend on decisions regarding the trade war, as this could ultimately stimulate global demand prospects.