U.S. crude dips below $20 as lockdowns wipe out demand

Oil prices fell sharply on Monday, with U.S. crude briefly dropping below $20 and Brent hitting its lowest level in 18 years, on heightened fears that the global coronavirus shutdown could last months and demand for fuel could decline further. Brent crude, the international benchmark for oil prices, was down $2.08, or 8.3%, at $22.85 by 1127 GMT, after earlier dropping to $22.58, the lowest since November 2002. 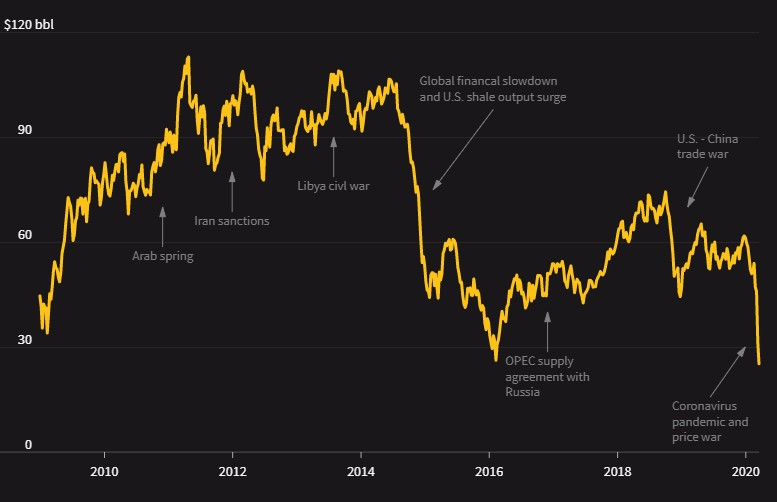 U.S. West Texas Intermediate (WTI) crude fell $1.11, or 5.2%, to $20.40. Earlier in the session, WTI fell as low as $19.92. The price of oil is now so low that it is becoming unprofitable for many oil firms to remain active, analysts said, and higher cost producers will have no choice but to shut production, especially since storage capacities are almost full.

“Global oil demand is evaporating on the back of COVID-19-related travel restrictions and social distancing measures,” said UBS oil analyst Giovanni Staunovo. “In the near term, oil prices may need to trade lower into the cash cost curve to trigger production shut-ins to start to prevent tank tops to be reached,” he added.

Supertanker freight rates are rising for a second time this month as traders rush to secure ships for storage. Goldman Sachs analysts said demand from commuters and airlines, which account for about 16 million barrels per day of global consumption, may never return to previous levels. The contango spread between May and November Brent crude futures reached its widest ever at $13.45 a barrel, while the six-month spread for U.S. crude broadened to minus $12.85 a barrel, the widest discount since February 2009.

On Monday, central banks in China and Singapore aggressively eased monetary policy, while Malaysia’s government unveiled a $58 billion stimulus package over the weekend. Collapsing oil prices have left some African producers facing lost revenue when they most need it to tackle coronavirus. Sovereign wealth funds from oil-producing countries mainly in the Middle East and Africa are also on course to dump up to $225 billion in equities.