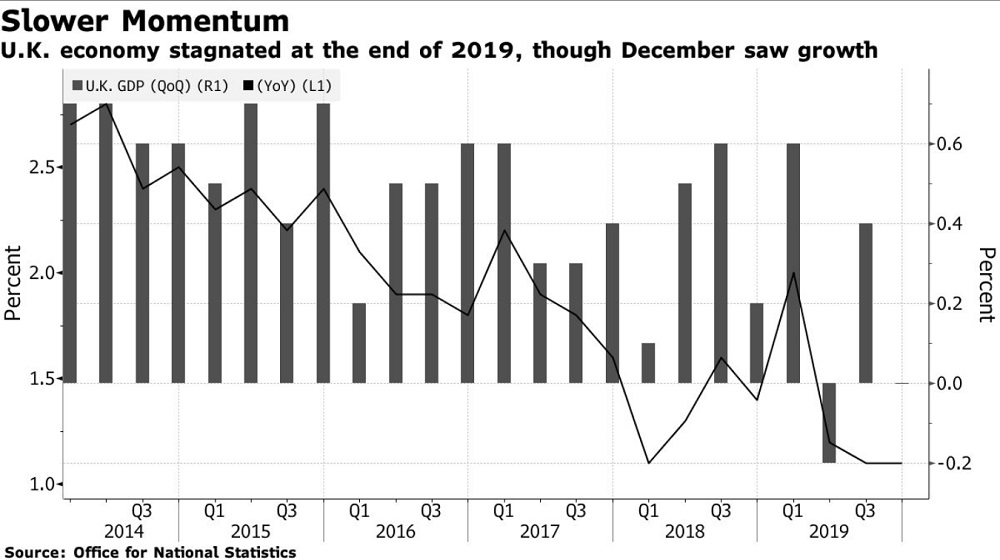 The U.K. economy narrowly avoided a contraction in the fourth quarter, adding to evidence of a pickup following Boris Johnson’s election win. Gross domestic product was unchanged from the third quarter, as forecast by economists in a Bloomberg survey. December alone saw output rise a stronger-than-forecast 0.3%. The pound gained as much as 0.2% after the report and was trading at $1.2929 as of 9:32 a.m. in London.

Signs of a revival since Johnson’s December election victory convinced the Bank of England not to cut interest rates last month, though uncertainty is expected to persist. Johnson, who honoured his election promise to take Britain out of the European Union on Jan. 31, now faces potentially fraught talks with the EU on a new trade deal. He has until the end of the year to reach an agreement or Britain will once again be facing a disruptive break with its biggest trading partner.

Consumer spending rose just 0.1%, the least since the end of 2015, and growth in the dominant services industry slowed to a crawl. Business investment fell 1% — the biggest drop since the end of 2016. The economy got some support from net trade as exports jumped. Inventories also contributed to growth, as did government spending, which posted the biggest increase since 2012 in a further sign that austerity is ending. In November, car factories shut down to deal with potential Brexit disruptions and there were signs of limited destocking of goods built ahead of the deadline. Britain posted an unexpected surplus in December, though this was driven by flows of non-monetary gold. The trade deficit excluding gold and other precious metals narrowed to 7.2 billion pounds.