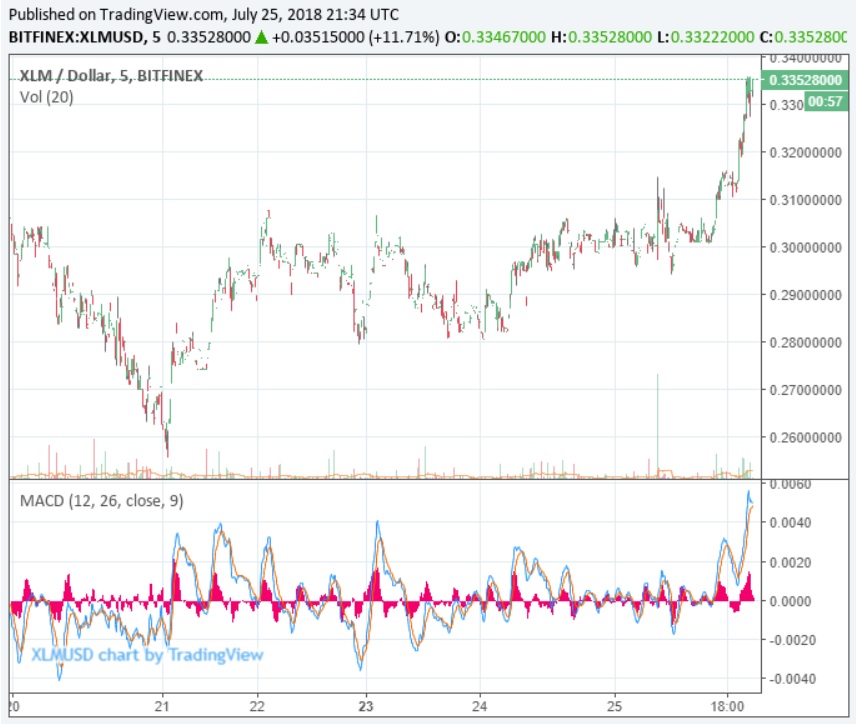 The stellar price reached a two-month high on Wednesday evening as it soared by well over 10% on major exchanges to reach a value of $0.33 on Bitfinex. Although there did not seem to be any particular news today to trigger this spike, the cryptocurrency — more accurately referred to as lumens (XLM) — has been in the news of late with considerable positive developments.

XLM’s volume also increased considerably on Binance, with over $17.5 million traded as at 10PM GMT. The development from Coinbase last week had also seen the stellar price shoot up by as much as 25% over a few days, and with today’s increase, the coin is around 40% up from its low of $0.17 registered in June.

The recent move by Coinbase created a wave of positive price appreciation for the currencies, with stellar posting a gain of 22% since the news was first released. XLM fans rejoiced over the reversal in 2018’s bear cycle, which saw their coin fall nearly 85% in value since the start of the year.

Additionally, the fact that the computing giant IBM is using stellar to pair with a digital stablecoin also gave a good hike to positive sentiment about XLM. In comparison, bitcoin is up by around 2% to retake the $8,200 level whilst other coins such as EOS and bitcoin cash were showing marginal improvements over the past few hours.

Another positive development could have been the announcement that BitIra also added stellar to its platform. The lesser-known California-based exchange continued its steady expansion of available coins with the addition of stellar (XLM) and zcash (ZEC), which joined bitcoin (BTC), ethereum (ETH), litecoin (LTC), ripple (XRP), bitcoin cash (BCH), and ethereum classic (ETC) as investment opportunities for its customers.