Russian President Vladimir Putin’s government plans to dramatically ramp up stimulus measures to prop up an economy that is lurching toward recession. The government will roll out about 1 trillion rubles ($13.5 billion) of new spending, according to two people familiar with the plans, who asked not to be named because discussions are ongoing. Some of the money will go toward subsidizing salaries of workers idled by isolation measures to fight the coronavirus, the people said. 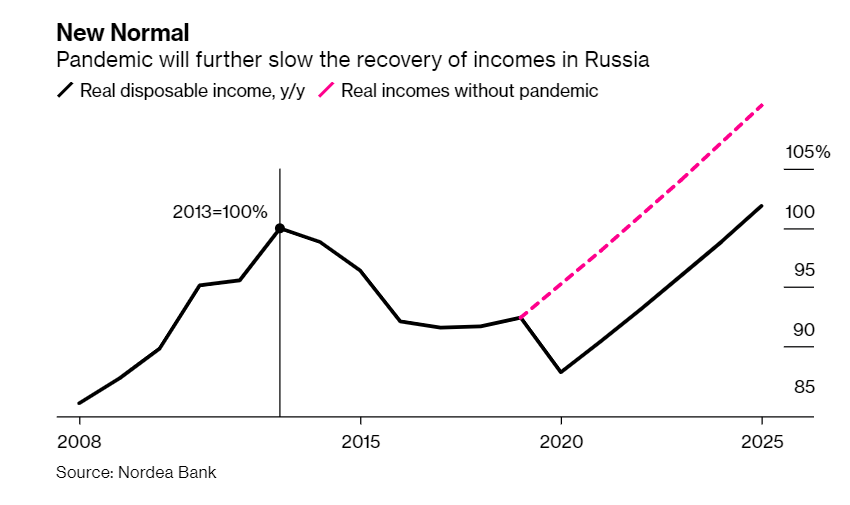 The stimulus will be funded by increased borrowing, not Russia’s $165 billion rainy-day fund, one of the people said. The government’s return to the ruble bond market after a five-week hiatus met with weak demand Wednesday. A spokesperson for the government didn’t respond to a request for comment. The plan is the clearest sign yet that Putin is willing to join other world leaders in ramping up spending to stave off a deep recession. Concern that oil prices will stay low for a long time after a nearly 50% drop this year have so far made the Kremlin cautious about releasing funds, despite growing pressure from businesses and economists.

Firms have been lobbying the government for weeks to increase support measures, which so far haven’t included direct handouts. Lobby groups warned that insufficient stimulus could lead to mass unemployment, bankruptcies and a deep economic slump. Previous spending plans only accounted for about 2% of gross domestic product, though officials and economists have called for as much as 10% to be made available. The central bank estimated that a government order for most Russians to work from home for the whole of April could knock 1.5% to 2% off growth this year, while the budget is being re-written to prepare for oil prices at $20 a barrel.