Global stocks fell on Tuesday, a day after U.S. crude oil prices turned negative for the first time, as dismal company earnings reports underlined worries about economic damage from the coronavirus pandemic. The dollar rose against a basket of peers as investors shunned riskier assets.

MSCI’s All Country World Index, which tracks stocks across 49 countries, was down 0.8%. European stock markets followed their Asian counterparts lower, with the pan-European STOXX 600 index down nearly 2% in early deals. 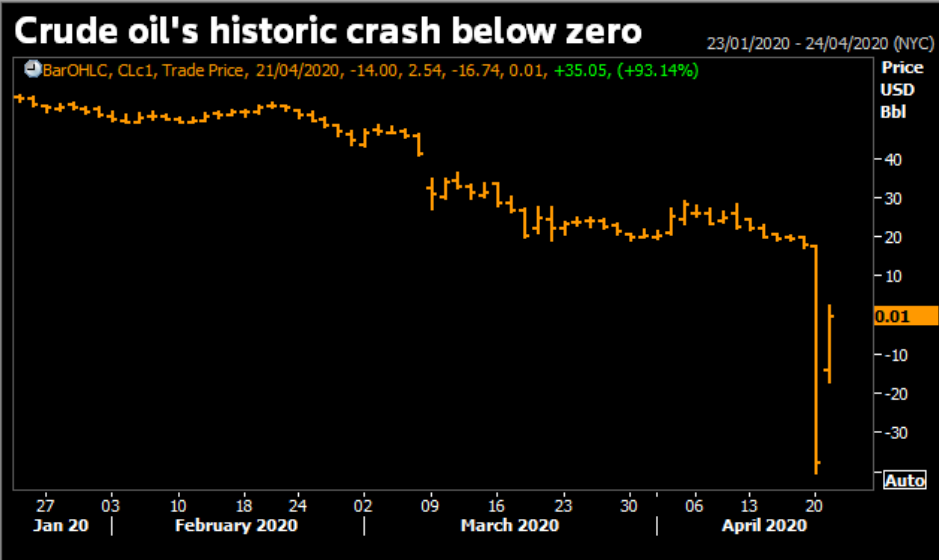 Monday’s historic plunge in oil, which saw some prices reach -$40 a barrel, is the result of growing crude stockpiles and a squeeze on storage space as lockdowns to contain the spread of the novel coronavirus slash global fuel use. First month West Texas Intermediate continued to trade in negative territory on Tuesday, at -$4.55 a barrel.

“I have always thought of oil a little bit like a currency; it stores value, is controlled by world leaders and makes the world go round,” said Gregory Perdon, Co-Chief Investment Officer at Arbuthnot Latham. “But yesterday was a wake-up call and investors would be remiss to ignore that low oil means lower inflation, higher defaults, lower growth and more political instability as less petrodollars circulate in the system.”

Signs the pandemic is taking a toll on the global economy continued to roll in. Australia’s central bank now forecasts the economy will shrink 10% in the first half of 2020 while South Korea is set for its biggest first-quarter contraction since 2008, with latest data showing exports plunging by almost a third in the first 20 days of April.

In Europe, investors will be watching the ZEW Institute’s survey of economic sentiment in Germany at 0900 GMT. The euro edged lower to the dollar, and Southern European bond yields traded near recent highs before a European Union summit later this week on how the EU will try to revive an economy hit by the pandemic.

International benchmark Brent crude, more readily seaborne than its U.S. counterpart, fell to $22.61 per barrel. The yield on benchmark 10-year U.S. Treasuries, which falls when prices rise, dropped under 0.6% to 0.5988% in afternoon trade. Spot gold prices traded flat at $1,693.19 per ounce.