Russia and Saudi Arabia are “very, very close” to a deal on oil production cuts, according to the chief executive of Russia’s sovereign wealth fund RDIF. “I think the whole market understands that this deal is important and it will bring lots of stability, so much important stability to the market, and we are very close,” said Kirill Dmitriev, CEO of the Russian Direct Investment Fund.

A virtual meeting between OPEC and its allies was scheduled to happen on Monday, but is now “likely” to take place on Thursday instead, sources familiar with the matter told CNBC. Reductions in oil output were expected to be discussed at the meeting that could bring the price war in oil to an end. 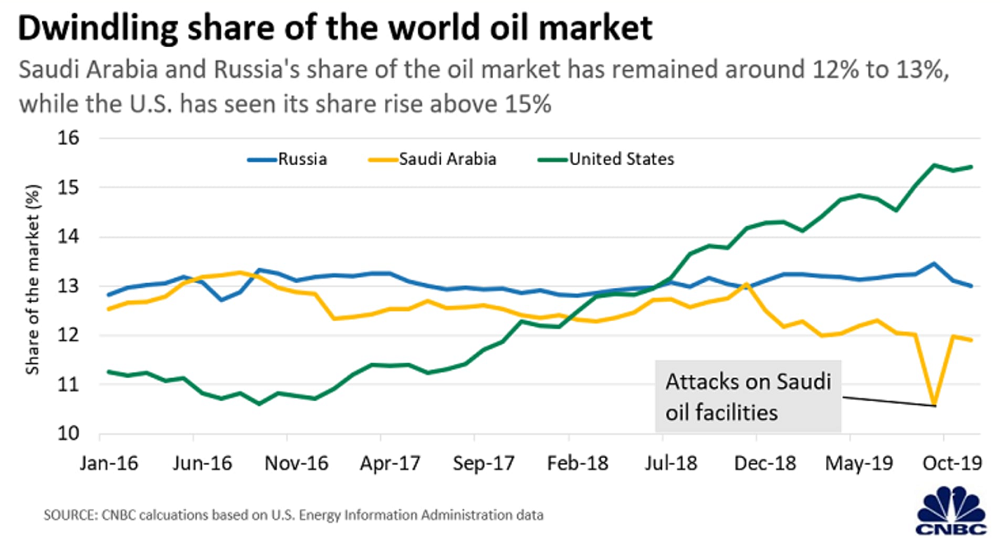 Oil futures pared earlier losses after the report on Monday in Asia, with U.S. West Texas Intermediate crude down 2.86% at $27.53 after falling as much as 9% earlier in the session, and Brent crude down 3.31% to $32.98 after briefly turning positive.

When asked if Riyadh and Moscow will get together by the end of this week for some kind of deal, Dmitriev said: “Well actually look, a very positive message, I think they’re very, very close.” He pointed to comments by Russian President Vladimir Putin last week when he proposed a combined production cut of 10 million barrels per day, according to a Reuters report. ″(Putin) talked about how important this oil deal is, so Russia is committed,” Dmitriev told CNBC’s “Capital Connection” on Monday.

That sentiment was echoed by Andrey Kostin, chief executive of Russia’s VTB Bank. “Russia is definitely very much interested in stabilizing oil prices and … there’s the political will,” he told “Squawk Box Europe.” “No one is interested in low oil prices. Neither the United States nor Russia, nor the Saudis,” he said. “From this point of view, I think there should be a reasonable agreement achieved at the end of the day.”

But one analyst told CNBC that Riyadh and Moscow, not America, are the key players in this agreement. “This Saudi-Russia rift, that’s really key to the deal,” Herman Wang, S&P Global Platts’ Middle East and OPEC managing editor, told “Capital Connection” Monday. “Set aside whether the U.S. will participate or not,” he said. “Without Saudi and Russia on the same page, there’s no deal to be had at all.”