Home › Daily Outlook › Masked and standing apart, the world tiptoes out of lockdown

Masked and standing apart, the world tiptoes out of lockdown

Italy and the United States were among a slew of countries tentatively easing coronavirus lockdowns on Monday to revive economies as global deaths surpassed a quarter of a million.

World leaders and organisations pledged $8 billion to fund a possible vaccine and treatments, many hoping explicitly to ensure that no country on Earth would be left out, but the United States did not contribute.

Italy, among the world’s hardest-hit countries, allowed about 4.5 million people to return to work after nearly two months at home. Construction work can resume and relatives can reunite.

“I woke up at 5:30 a.m., I was so excited,” said Maria Antonietta Galluzzo, a grandmother taking her three-year-old grandson for a walk in Rome’s Villa Borghese park, the first time they had seen each other in eight weeks. 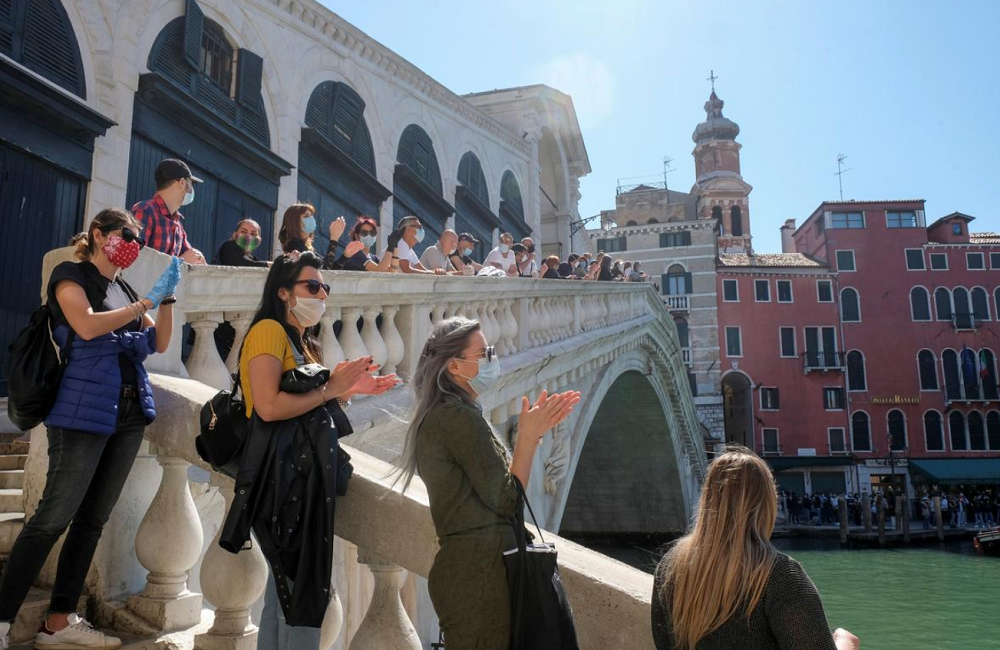 In the United States, which has the world’s highest total of infections and deaths, at almost 1.2 million and 68,000 respectively, Ohio and other states were easing more curbs on businesses.

Spain, Portugal, Belgium, Finland, Nigeria, India, Malaysia, Thailand, Israel and Lebanon were also among countries variously reopening factories, construction sites, parks, hairdressers and libraries. The daily increase in coronavirus cases worldwide has been 2%-3% over the past week, down from around 13% in mid-March.

Confirmed cases – certain to exclude many mild cases – have risen to around 3.58 million, according to a Reuters tally. Italian Prime Minister Giuseppe Conte said his country, where the novel coronavirus has killed over 29,000 people and over a thousand new cases are reported daily, was still in the “full throes of the pandemic.”

Italy’s statistics bureau said it could be assumed that a further 11,600 deaths were people who had died of COVID-19 without being tested, or of other causes that a stressed health service had been unable to treat them for.

Friends are still barred from meeting up, most shops must stay shut until May 18, and schools, cinemas and theatres remain closed indefinitely.

After a fractious and haphazard initial global response to the pandemic, the head of the European Commission, Ursula von der Leyen, said the $8.1 billion initially raised by the U.N.-backed donor conference would “help kick-start unprecedented global cooperation.” Access to an eventual vaccine “will be given to people across the globe by the organisation we choose,” French President Emmanuel Macron said. A senior U.S. administration official declined to say specifically why the United States was not participating. “We support this pledging effort by the EU. It is one of many pledging efforts that are going on and the United States is at the forefront,” the official told reporters by telephone.

President Donald Trump is halting U.S. funding to the World Health Organization over its handling of the pandemic. “It is a pity the U.S. is not a part of it,” said Norwegian Prime Minister Erna Solberg, pledging $1 billion. “When you are in a crisis, you manage it and you do it jointly with others.”

Masked and standing apart, the world tiptoes out of lockdown, Reuters, May 5