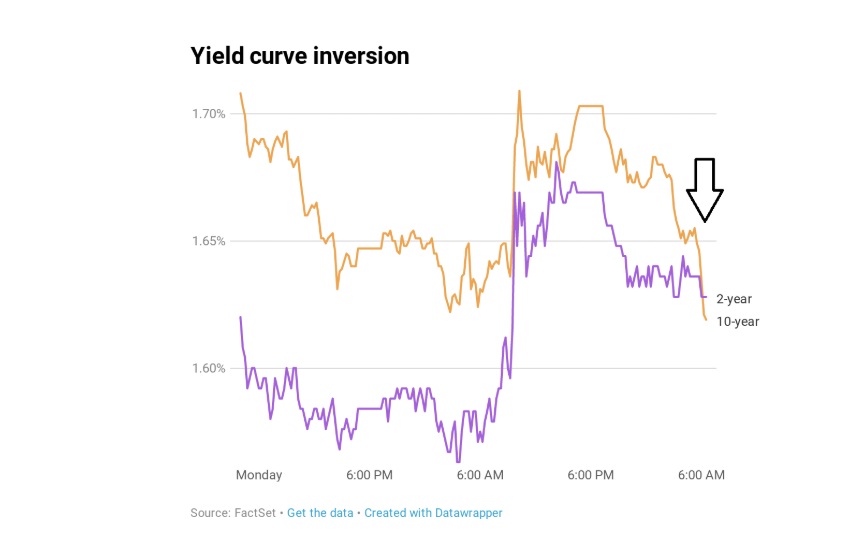 The yield on the benchmark 10-year Treasury note on Wednesday broke below the 2-year rate, an odd bond market phenomenon that has been a reliable, albeit early, indicator for economic recessions. The yield on U.S. 30-year bond fell to a new all-time low, dropping past its prior record notch in summer 2016. The moves shows increasing worries about the global economy as investors rush into safe haven assets.

Early Wednesday, the yield on the benchmark 10-year Treasury note was at 1.623%, below the 2-year yield at 1.634%. The last inversion of this part of the yield curve was in December 2005, two years before a recession brought on by the financial crisis hit. The yield on the 30-year Treasury bond traded at 2.061%, below its former record low of 2.0889% hit in 2016 following Britain’s Brexit vote. Yields fall as bond prices rise.

Investors are now demanding higher interest rates on short-term debt than they are longer term debt, a phenomena known as an “inverted yield curve.” Economists often give the spread between the 10-year and the 2-year special attention because inversions of that part of the curve have preceded every recession over the past 50 years.

Data from Credit Suisse going back to 1978 shows:

The last five 2-10 inversions have eventually led to recessions.

A recession occurs, on average, 22 months following a 2-10 inversion.

It’s not until about 18 months after an inversion when the stock market usually turns and posts negative returns.