FxPro: How FOMC will affect the markets today

There was a positive reaction of the stocks on Wednesday, gaining momentum during the day. As a result, the U.S. main indices held an impressive rally with a growth by more than 2%.

The dynamics of the American dollar was not a one-way street. Following the initial decline due to the recovery of demand for risks, the demand for the dollar returned as the focus of market participants shift to Fed’s monetary policy decision.

No change in the rates is expected today, but there have been hints for an increase in December. However, there is room to strengthen the American currency. According to CME’s FedWatch tool, the markets price only 80% probability of raising the rates again by the year end, which is lower than a month ago.

In the case that the Fed is confident in the economy and is determined to prevent overheating, the U.S. dollar will return to growth, which was interrupted at the beginning of the month due to the pre-election uncertainty. 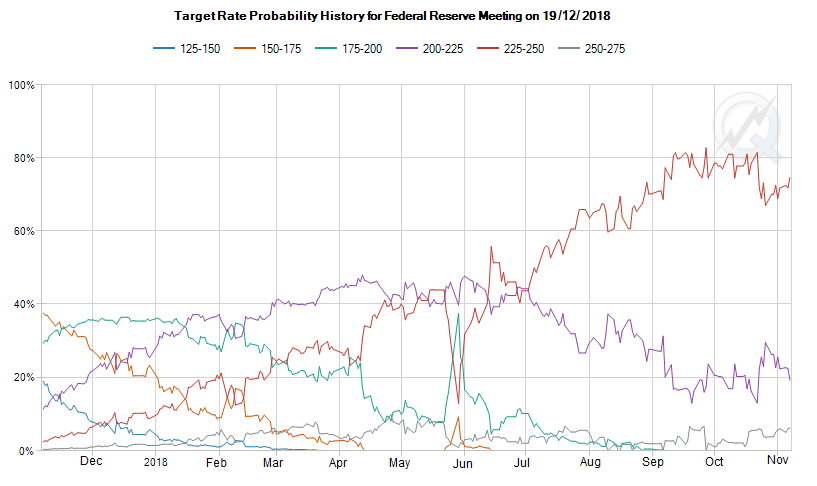 At the same time, it is impossible to completely exclude surprises. The heightened turbulence of the markets last month may capture the central bank’s attention. Especially, considering that the hawkish comments were one of the main reasons for volatility subsequent to Jerome Powell’s words in regard to the willingness of raising the rates above the neutral level.

In previous years, the Fed paid attention to the economic conditions and the behaviour of the stock markets, not only domestically but also in other regions. For example, amid the collapse of Crude Oil and turbulence in China’s markets in 2015, plans for tightening policies were postponed.

This attentiveness to the situation is not as manifests this year. The Fed raised the rate in September, despite turbulence in the markets of developing countries. The softer tone can lead to a new wave of buying on the stock markets and could put pressure on the dollar. This option looks unlikely, but it cannot be completely excluded.