Home › Daily Outlook › FxPro: Too much hopes on the market for G20 and other policymakers

FxPro: Too much hopes on the market for G20 and other policymakers

The market is demonstrating positive dynamics, and the risks are somewhat minimized. However, there are too many hopes in regard to the policymaker’s actions.

Firstly, the meeting of the leaders of China and the USA has triggered high hopes in the market. Earlier this year it seemed that the parties had reached a mutual understanding, but nonetheless the situation was only deteriorating thereafter. There are high chances that we will see a raise in the tariffs from both sides. To the date, tariffs are still advantageous to the U.S., and they thus refuse to double the amount of fees or raise the rate from 10% to 25%.

China Manufacturing PMI fell to 50.0, a point that separate growth from decline. Nevertheless, this did not instigate a decline in the market due to the fact that the market participants are still hoping for a stimulus from the government that will spur economic growth. However, investors have been repeatedly disappointed by the similar, long-awaited stimulus in the past. 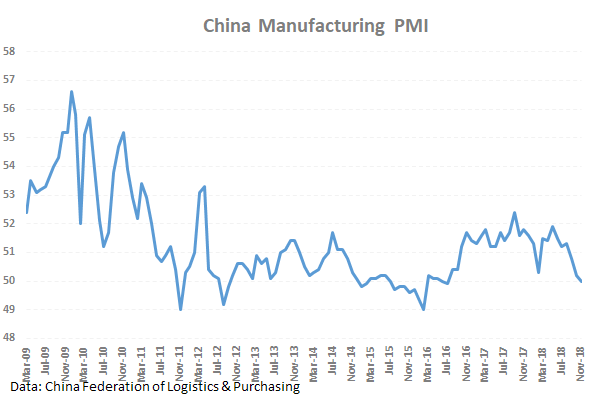 Equally alarming, is the situation around Crude Oil. In the weekend, there is a meeting between the leaders of Russia and Saudi Arabia, at which they will discuss when and how much the production in the OPEC + will be reduced. In fact, these countries, as well as the United States, have set their own records in drilling this autumn, which in turn, intensified the collapse of oil. In 2016, the principle decisions to limit the production to its realization took almost a year. This time, the decisions in regard to the production of oil, which will probably take as much time, are able to easily push Brent oil back to the area of $50 per barrel and WTI back to the area of $40-43 per barrel.

The yield of Italy’s government bonds has been declining from the recent highs, in the hope that the Italian government and European Commission will come to an agreement on the budget for 2019. We should recall, that this is how the sovereign debt crisis in Greece had been developing at that time, but it thereafter gone on for many years and radically affected the confidence in the integrity of the eurozone.

Increased buying in the U.S. stock markets proves that participants are confident that the Fed will act cautiously and will make a pause soon. In the light of recent comments from the Fed, these expectations are partly justified. However, this does not cancel out the December’s increase. The Fed will have enough time to change its attitude and influence the markets.