The Federal Reserve, saying “the coronavirus outbreak has harmed communities and disrupted economic activity in many countries, including the United States,” cut interest rates to essentially zero on Sunday and launched a massive $700 billion quantitative easing program to shelter the economy from the effects of the virus. The new fed funds rate, used as a benchmark both for short-term lending for financial institutions and as a peg to many consumer rates, will now be targeted at 0% to 0.25% down from a previous target range of 1% to 1.25%. 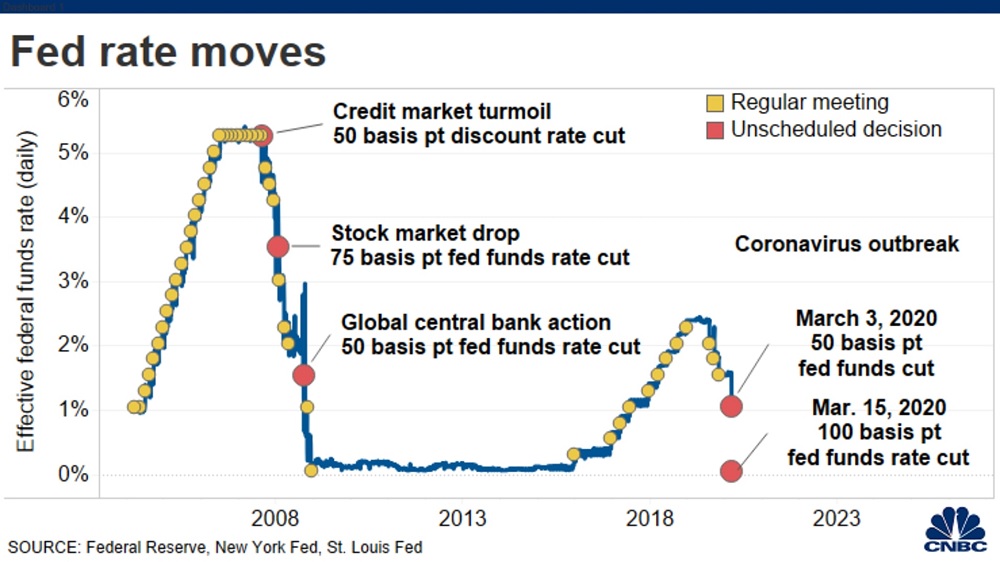 Facing highly disrupted financial markets, the Fed also slashed the rate of emergency lending at the discount window for banks by 125 basis points to 0.25%, and lengthened the term of loans to 90 days. Despite the aggressive move, the market’s initial response was negative. Dow futures pointed to a decline of some 1,000 points at the Wall Street open Monday morning. The discount window “plays an important role in supporting the liquidity and stability of the banking system and the effective implementation of monetary policy … [and] supports the smooth flow of credit to households and businesses,” a separate Fed note said.

The discount window is part of the Fed’s function as the “lender of last resort” to the banking industry. Institutions can use the window for liquidity needs, though some are reluctant to do as it can indicate they are experiencing financial issues and thus sends a bad message. The Fed also cut reserve requirements for thousands of banks to zero. In addition, in a global coordinated move by centrals banks, the Fed said the Bank of Canada, the Bank of England, the Bank of Japan, the European Central Bank, the Federal Reserve, and the Swiss National Bank took action to enhance dollar liquidity around the world through existing dollar swap arrangements. The banks lowered the rate on these swap line loans and extended the period for such loans. The actions by the Fed appeared to be the largest single day set of moves the bank had ever taken, mirroring in many ways its efforts during the financial crisis that were rolled out over several months. Sunday’s move includes multiple programs, rate cuts and QE, but all in a single day.