BitMEX announced an ether quarterly futures product Friday, which it described as “the only one of its kind available in the market.” Settled in bitcoin, the contract trades the ether-dollar pair, and expiry is in June. This coincides with the scheduled ETH 2.0 launch in July, which Ethereum researchers are confident will happen, as CoinDesk previously reported.

Long positions in Bitfinex ether perpetual futures are also soaring ahead of the Ethereum upgrade. Those contracts began noticeably climbing starting in mid-March, just after the price of ether crashed to a little above $100. 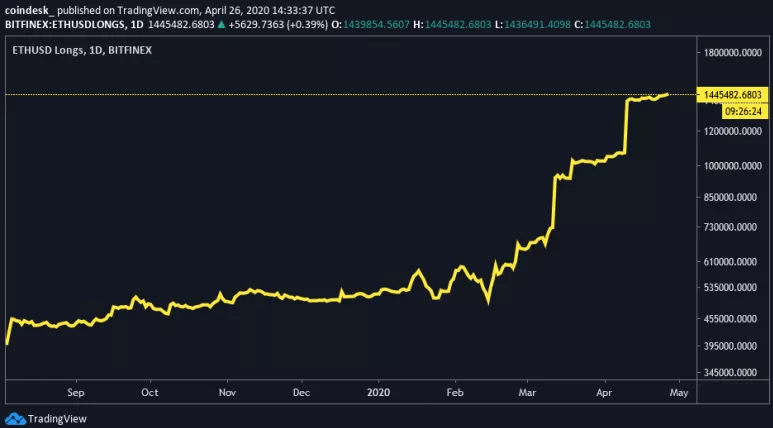 While quarterly futures have contract dates four times per year, perpetual futures trade without expiration dates. This gives traders some of the advantages of the futures markets such as high leverage while mimicking the price behavior of the spot market.

Open interest for ether futures on Bitfinex is at just over $500,000 at the time of publication, while open interest on BitMEX, the largest market for ether perpetual futures, is just below $80 million, according to data aggregator CoinGecko. Bitfinex traders taking more long positions in ether futures could signal speculative bullishness ahead of the ETH 2.0 launch in addition to hedging strategies or an arbitrage trade incentivized by funding rates.

The ETH 2.0 mainnet launch has “too many variables that developers can’t account for at the moment,” Withiam told CoinDesk. But the community is generally enthusiastic about staking ether, and if the launch was delayed again, it “shouldn’t mute the community’s enthusiasm for staking,” said Withiam. After mainnet launches, short-term returns for cryptocurrencies are largely negative, according to research from Messari. The price of ether was up less than 1 percent on Sunday at $195 at the time of publication, according to Bitstamp.