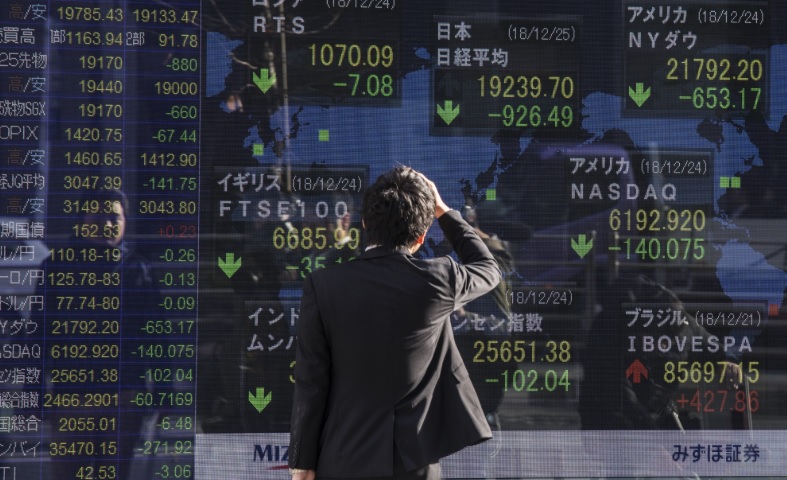 As a turbulent December in equity markets draws to a close, there’s one thing traders and investors can agree on: these are not usual times, especially for this time of year. It’s “completely bizarre,” says Stephen Innes, head of trading for Asia Pacific at Oanda Corp. “It’s incredible just how harmful markets veer when sentiment slides.”

Innes has been taking profit on some winning investments, and snapping up blue-chip stocks whose valuations have dropped in the December sell-off, but for the most part he’s keeping his money on the sidelines. Like many other traders in Asia, he’s been watching events play out in the U.S. from a distance, amazed at what he sees. The S&P 500 Index posted its biggest upward reversal since 2010 on Thursday, a day after the gauge capped its largest advance since 2009. Despite the two-day gain, the measure is still down almost 10 percent in December alone. “I’m on the golf course,” Innes says about how he’s responding. “As I have been most of the week.”

Over in Sydney, Sean Fenton is scratching his head. “It’s certainly unusual for this time of year,” the portfolio manager at Tribeca Investment Partners says of the market moves. “You see people take holidays and sort of shutting up shop, not surges in volatility.” Fenton, like Matthews, says he’s hunkering down, betting that the U.S. economy is robust and the sell-off will bottom out. For this time of year, he’s “probably a little more focused on the market,” he says, but that doesn’t mean he’s got reasons for the moves. “Trying to explain short-term movements in the markets is an exercise in futility because generally it’s pretty random,” he says.