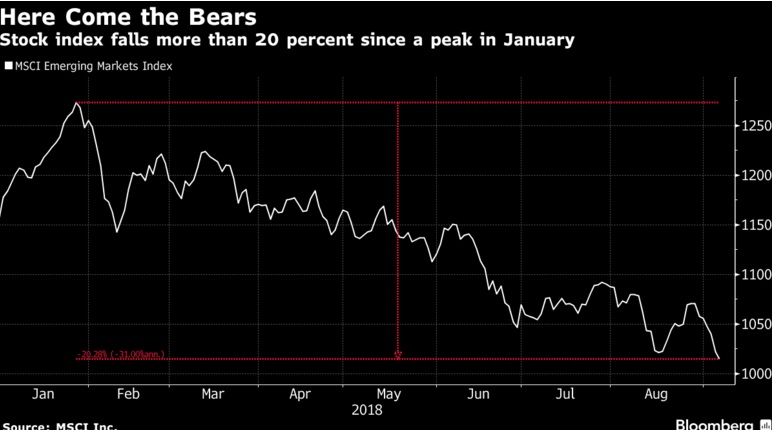 Emerging-market stocks flirted with a bear market and most currencies fell as investors brace for more U.S. tariffs on Chinese imports. The MSCI Emerging Market Index retreated for a seventh day, bringing its drop since a peak in January to more than 20 percent. The gauge will fall into a bear market if it holds that drop by the close in New York. Stocks in the Philippines were the biggest decliners in the world after inflation exceeded 6 percent for the first time since 2009. South Africa’s rand and Mexico’s peso led a retreat in currencies.

Most observers see more pain in store for emerging-market assets, particularly if President Donald Trump’s administration follows through on a plan to levy $200 billion of additional tariffs on Chinese imports after a consultation period ends Thursday. The Bloomberg Dollar Spot Index reversed an earlier decline to rise for a fifth day in six, keeping the pressure on developing nations.

“The very tough conditions for emerging markets are likely to continue for a while and economies with current-account deficits will probably remain a major target of sell-offs,” said Takashi Kudo, the head of financial markets research at Fujitomi Co. in Tokyo. “Emerging currencies are seeing some stabilization in the very short term amid a series of supports from respective monetary authorities,” including intervention and rate increases, he said.