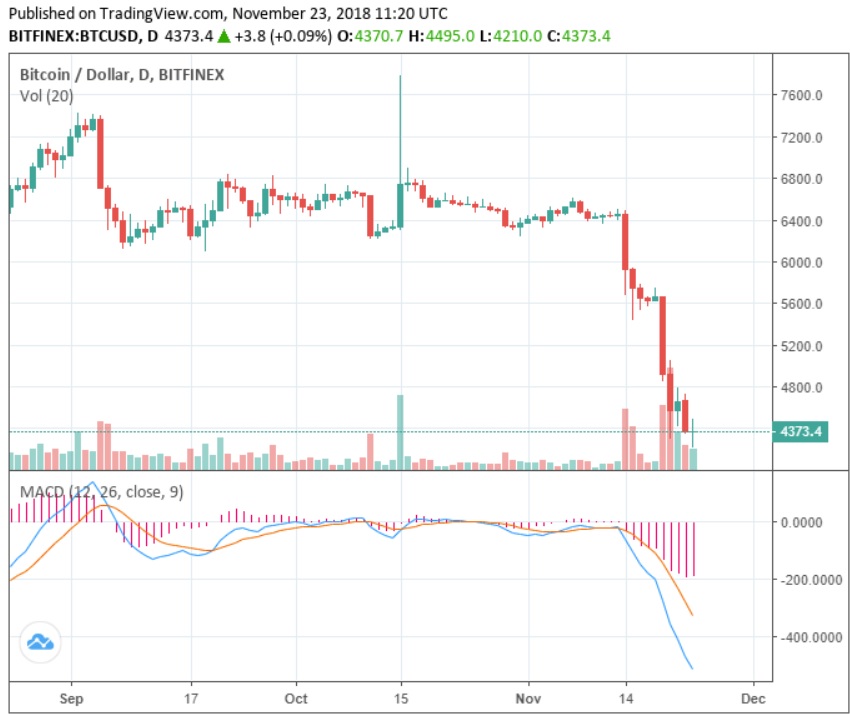 In the last 24 hours, more than $6 billion was wiped out of the cryptocurrency market as Bitcoin (BTC), the most dominant cryptocurrency in the market, recorded a loss of 8.6 percent from $4,500 to $4,110. On fiat-to-cryptocurrency exchanges like Coinbase, Kraken, and Bitstamp, the price of BTC reached a new weekly low at around $4,118. Bitcoin has since recovered to $4,291, but on a weekly basis, BTC remains 21.65 percent down against the US dollar.

Similar to Bitcoin’s strength at $6,000 from August to November, despite experiencing an intense sell-off, bears are struggling to bring BTC below the $4,000 support level. If BTC continues to defend the $4,000 level, in the weeks to come, there exists a possibility for BTC to end 2018 with a positive sentiment, potentially above $6,000 which has now turned into a major resistance level for the dominant cryptocurrency.

One alarming trend of both Bitcoin and other major cryptocurrencies is that the prices of leading digital assets are dropping by relatively large margins with low daily volumes. The volume of BTC is averaging at around $5.1 billion, which suggests that BTC has fallen by more than 3.5 percent in the past 24 hours without significant sell-pressure from bears.

With initial coin offering (ICO) projects struggling to find relevance in the space, Ethereum (ETH) is finding it difficult to secure any sort of momentum in its low price range. In the past 24 hours, ETH has dropped by more than 6 percent to $124, with a high volume of $2 billion. Throughout the last six months, ETH has rarely experienced a surge in its volume over the $1 billion mark. The $2 billion daily volume of the third largest cryptocurrency in the global market demonstrates increasing sell-pressure from individual sellers and ICOs.