Home › Daily Outlook › China’s exports, imports fell in March but not as much as expected

China’s exports, imports fell in March but not as much as expected

China reported that its dollar-denominated exports and imports both fell from a year ago in March, but they were better than what economists had expected. China’s exports fell 6.6% in March from a year ago, while imports slipped 0.9% in the same month, data from the General Administration of Customs showed on Tuesday. 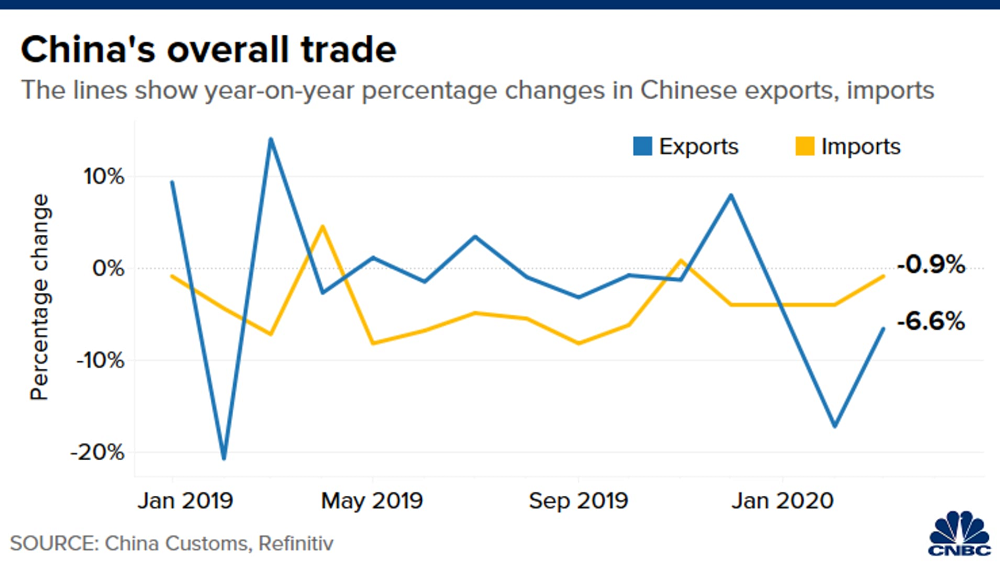 Earlier this year, China reported combined trade data for the months of January and February. Over the two months, exports fell 17.2% from a year ago while imports fell 4% as the coronavirus outbreak put the brakes on the world’s second largest economy. China’s trade surplus with the U.S. narrowed to $15.32 billion in March from $25.37 billion in January and February, according to Reuters calculations.

The China-U.S. phase one trade agreement is gradually being implemented, said Li Kuiwen, spokesperson for the General Administration of Customs, according to a CNBC translation of his Mandarin-language remarks at a press conference. While the outbreak appears to have abated in China recently, it remains a serious situation in the rest of the world. Global cases of Covid-19 hovered near 2 million on Tuesday.

“A sort of V-shaped rebound of the Chinese economy is being challenged because of the second round feedback response from the weakening of global demand on Chinese exports, and hence the Chinese manufacturing sector,” said Chi Lo, senior economist for Greater China at BNP Paribas Asset Management. Purchasing Managers’ Index readings released earlier for the month of March showed manufacturing activity expanded in March — but that was compared with severe contractions in February. Analysts caution that there are still headwinds from the global pandemic.

China’s exports, imports fell in March but not as much as expected, CNBC, Apr 14