China says exports rose 3.5% in April, crushing expectations for a decline of 15.7%

China’s dollar-denominated exports unexpectedly rose in April, but imports fell the same month as movement restrictions to contain the coronavirus outbreak eased. According to data from the General Administration of Customs released on Thursday, exports rose 3.5% from a year ago while imports fell 14.2% in the same period. 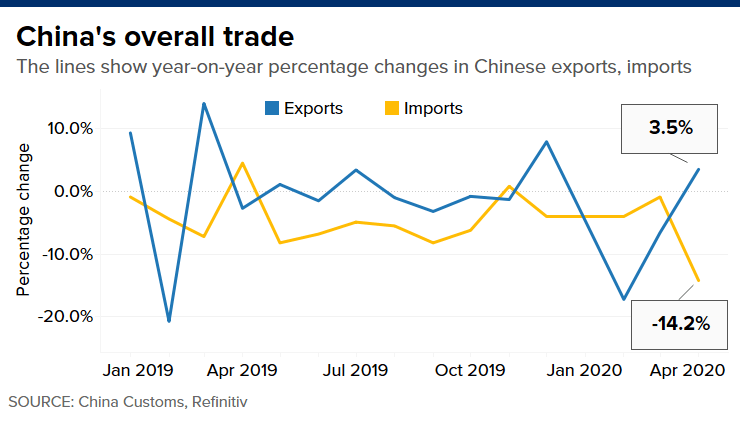 The exports of such medical supplies — that includes 27.8 billion face masks and 130 million protective suits — could have boosted headline export growth in March and April by as much as 2.7 percentage points from a year ago.

Factories were also likely fulfilling a backlog of orders as Chinese workers gradually headed back to work after an extended lockdown from late January. Spending on services would also be lower than a year ago. “People may feel probably a bit worried or nervous about going to malls, to dine there, or to stroll around, or to send their kids to their English extra curricular education center etc.,” said Qiao.

There are also concerns over China’s current political standoff with the U.S. over the coronavirus pandemic, with President Donald Trump threatening additional tariffs on China in retaliation for the outbreak.