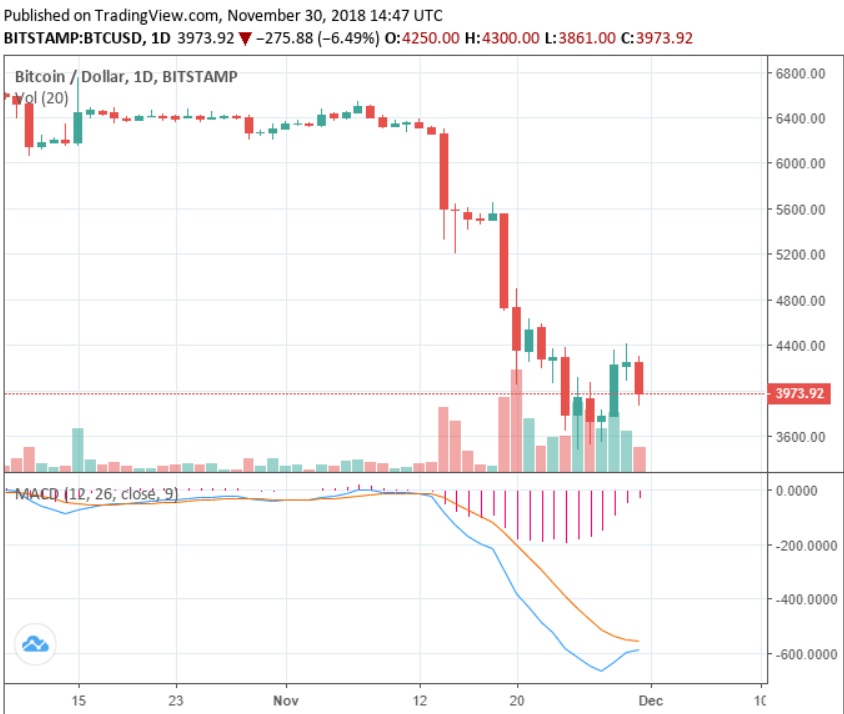 On November 28, the price of Bitcoin (BTC) spiked from $3,771 to $4,355, by more than 15.4 percent. In less than 48 hours, the dominant cryptocurrency has fallen back down to $3,861, dropping below the $4,000 mark. Bitcoin recorded a 7-month high daily spike in value on Wednesday, leading traders to be optimistic about the short-term trend of the asset considering the sheer intensity of the upward movement.

But, the lack of momentum of BTC inevitably led the cryptocurrency to fall by around seven percent in the past 12 hours. On Wednesday, Hacked.com reported that traders were not convinced of a bull run following Bitcoin’s strong 15 percent rally. At the time, prominent cryptocurrency trader with the alias The Crypto Dog said:

“Very weak. I originally had a bullish mindset watching this PA but the response from bulls has been disappointing. I still think we’ll see a bounce from 4k, but it may not continue much further. Let’s see what happens.” Alex Kruger, an economist and a cryptocurrency trader, also suggested that while the short-term corrective rally allowed the asset to establish a bottom, it has not found a proper bottom in a price range and that a drop below the $4,000, possibly to $3,700, remains a possibility.

According to cryptocurrency technical analyst Hsaka, when the price of Bitcoin hovered at around $4,300, it was testing a resistance level. Breaking out of it could have allowed the asset to test major resistance levels in the higher range of $4,800 to $5,200, but ultimately, BTC struggled to demonstrate strength at $4,300. “Don’t go getting euphoric already, price is at resistance on higher time frames. Expecting a pullback to 4060 to begin with. It’s also puts expiry day tomorrow. Bullish on volatility,” Hsaka said, prior to the drop.

BTC again has fallen back down to $3,861, CCN, Nov 30
Article Rating
Related Articles