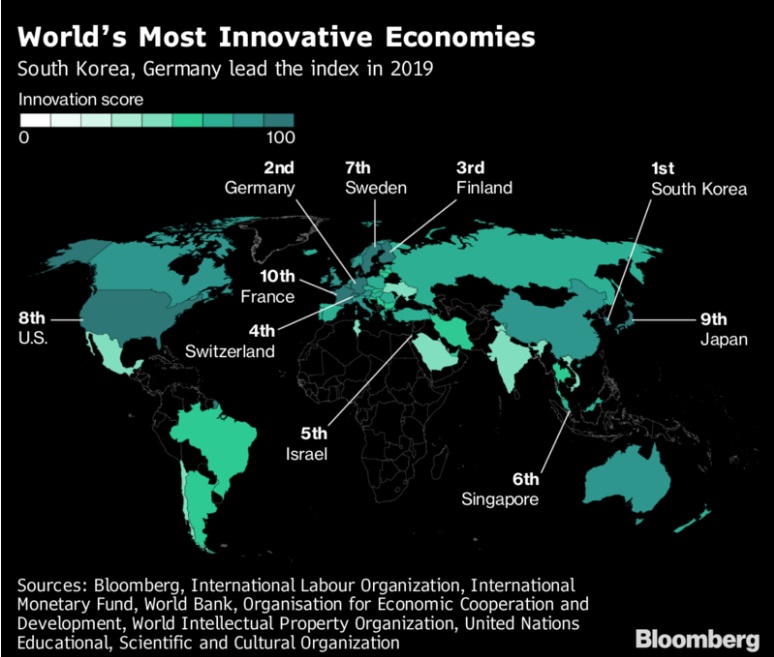 South Korea retained the global crown in the 2019 Bloomberg Innovation Index, though improvements by Germany in research and education brought Europe’s largest economy to near-parity in the annual ranking. The U.S. moved up to eighth place, a year after cracks in education scores pushed it out of the top 10 for the first time.

The annual Bloomberg Innovation Index, in its seventh year, analyzes dozens of criteria using seven metrics, including research and development spending, manufacturing capability and concentration of high-tech public companies. The ranking comes as global elites gather at this week’s annual World Economic Forum in Davos, Switzerland, where they will discuss the future of globalization, the role of the state and how innovation propels countries forward.

In the Bloomberg Index, Germany almost caught six-time champion South Korea on the strength of added-value from manufacturing and research intensity, much of it built around industrial giants such as Volkswagen AG, Robert Bosch GmbH and Daimler AG. Although South Korea extended its winning streak, its lead narrowed in part because of lower scores in patent activity. Germany’s rise in the Bloomberg ranking also seems tentative, as Europe’s largest exporter struggles with a shortage of skilled workers and changing immigration policies, according to Juergen Michels, chief economist of Bayerische Landesbank. It must hone its strategy in high-tech sectors, including industries such as diesel, digital communications and artificial intelligence, he added.

The U.K. fell one spot to 18th and lost out to China for the first time. China’s score reflects a dichotomy in the world’s second-largest economy: it ranked No. 2 in patent activity on the strength of R&D from Huawei Technologies Co. and BOE Technology Group, but still lags behind most innovative alums in overall productivity.

These Are the World’s Most Innovative Countries, Bloomberg, Jan 22