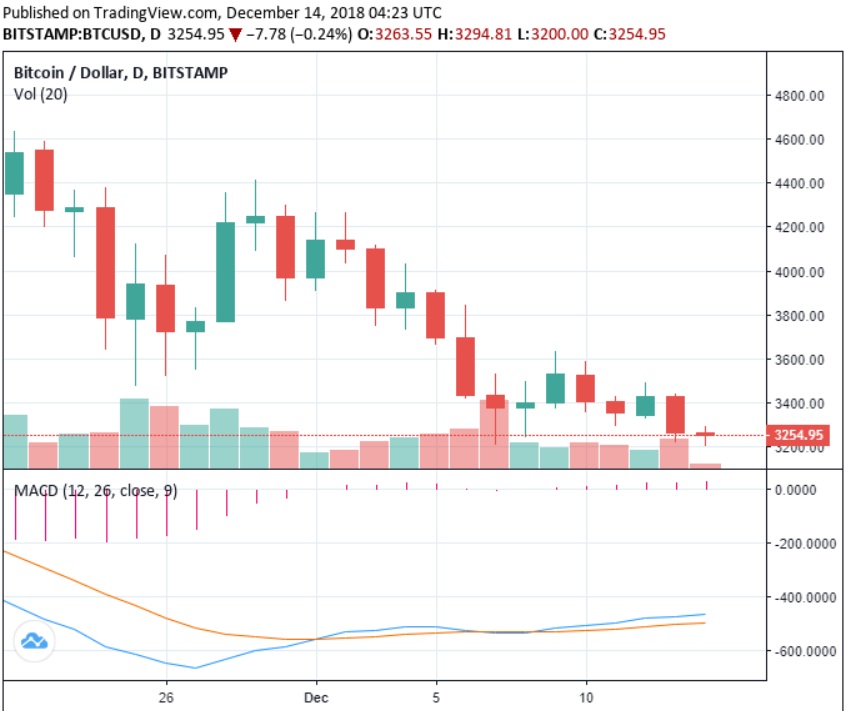 On December 14, following a fairly large sell-off from the $3,400 region, the Bitcoin price dropped to a new yearly low at $3,200. As Bitcoin (BTC) declined in value, other major cryptocurrencies including Ethereum (ETH), Stellar (XLM), and Bitcoin Cash (BCH) experienced large losses against the U.S. dollar, with BCH falling by more than 11 percent.

Within a seven-day period, the Bitcoin Cash price` has fallen from $116 to $89 by more than 25 percent despite dropping nearly half of its value the previous week. Prior to the four percent drop in the value of BTC, a cryptocurrency trader with an online alias “The Crypto Dog” suggested that it may be a risky period to initiate trades on the short-term trend of the dominant cryptocurrency due to its volatility in a low price range.

Over the past six months, the vast majority of major cryptocurrencies and ERC20 tokens have fallen by 50 to 80 percent against BTC, which fell by nearly 85 percent on its own. For Bitcoin to drop by a similar magnitude as Ethereum, for instance, it would have to drop an additional 72 percent from its current price. As Bitcoin struggles and as venture capital firms back away from the cryptocurrency sector amidst falling prices, the asset will likely not be able to initiate a breakout above the $4,000 mark in the upcoming weeks.

This week, Barry Silbert, the founder and CEO of large-scale cryptocurrency-focused venture capital firm Digital Currency Group (DCG) said that venture capital firms have started to pull out from deals with companies in the crypto sector. Silbert said: “We’ve seen half a dozen fundraising deals fall apart over the past month after the lead pulled out. All is not well in crypto VC investor land Good time to remind founders that a signed term sheet does not equal cash in the bank.”