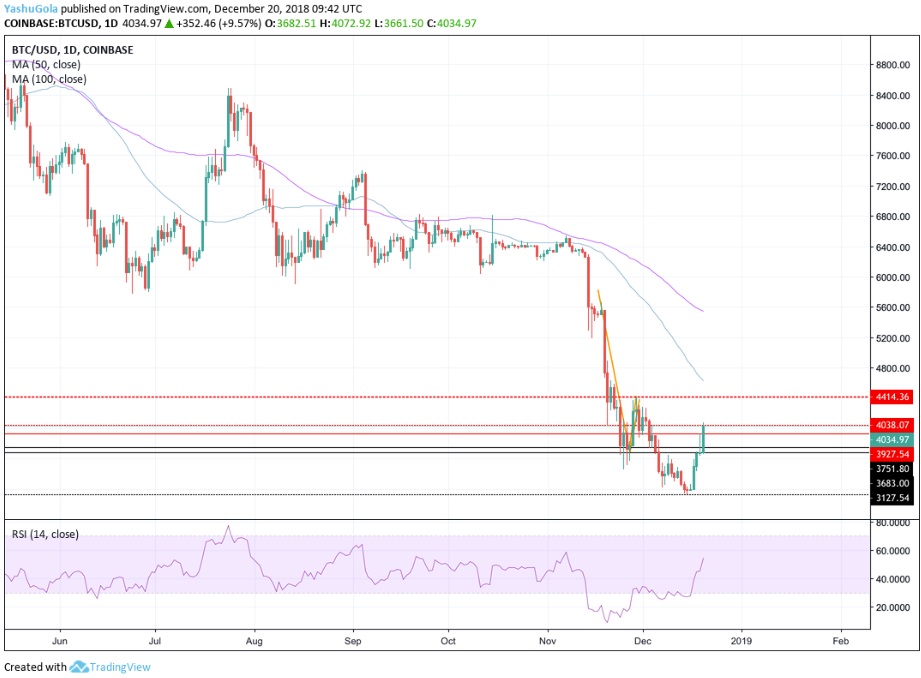 Bitcoin price is surging above the psychological resistance of $4,100 in an extended buying action. The Bitcoin/Dollar rate rose to $4100 on Coinbase between 9-10 am UTC – a level that was breached to the downside during the December 3 trading session. The pair, around the same time, was trading at a prime rate of $4197 on BitFinex. The overall rebound is promising to reinstate bullish faith in the market that just witnessed a crash to a yearly low near $3100. The price since has surged an impressive 29% while the bitcoin market capitalization has also jumped to its two-week high of circa $70 billion.

There is no fundamental evidence that backs the ongoing upside momentum. Nevertheless, the more it goes up, the better it has the probability to confirm the area around $3127 as the new bottom. Interestingly, the jump coincided with a major macroeconomic event in the US. The Federal Reserve on Wednesday increased the interest rate as expected, sending shivers across the US stock market that plunged hugely. Bitcoin remained unaffected by the unnerving mainstream price action, and maintained its bullish call, nevertheless.

On technical merits, the Bitcoin/Dollar rate is doing what it is supposed to do: recovering from its oversold territory after staying there for a relatively larger time. As predicted in our previous analysis, we are looking at the formation of an inverse head and shoulder and there is a likelihood of many long positions to call exit at this level. Nevertheless, those with more bullish expectations for bitcoin must be clearly eyeing $4414 – the resistance level from November 29 trading session- as their primary upside target, followed by a go at the 50-period moving average.