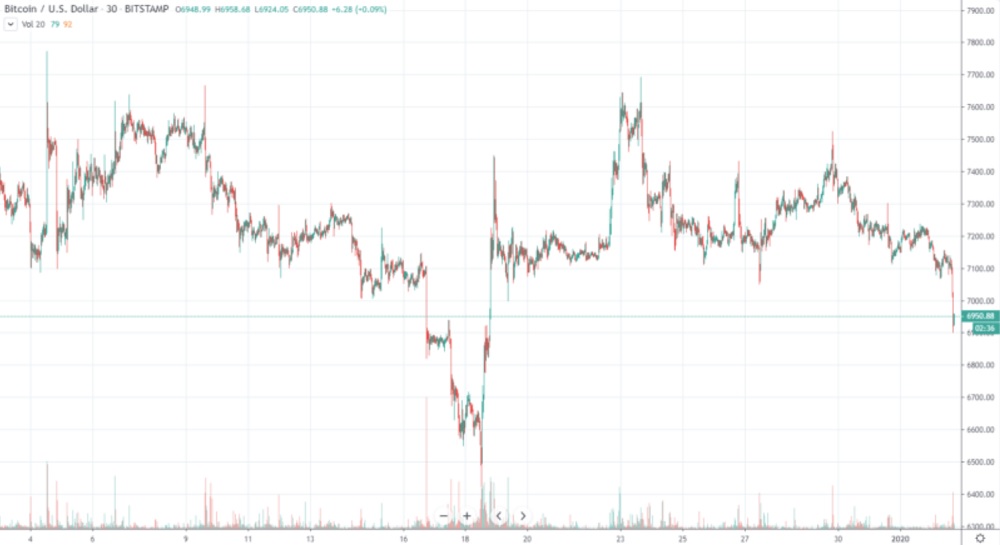 The price of bitcoin tumbled to fresh multi-week lows on Thursday, as the largest cryptocurrency continued to trade independently of broader market forces. The fresh dump came as central-bank liquidity fueled strong rallies in stocks, gold and the U.S. dollar. Bitcoin’s price touched an intraday low of $6,900 on Bistamp, the lowest in over two weeks. The largest cryptocurrency by market cap was last seen hovering near $6,950, down 3.2% on the day.

A lack of momentum has kept bitcoin subdued to the $7,000-$7,500 trading range for the better part of five weeks. The largest cryptocurrency has pierced $7,600 only twice over that stretch; first on Nov. 30 and then again on Dec. 23. Each time, the rally quickly fizzled and the bears took over. At current values, bitcoin has a total market cap of $126.6 billion, according to CoinMarketCap. It represents 68.1% of the overall cryptocurrency market.

Real turnover in the bitcoin spot market plunged to around $457 million, according to Bitwise tracking data. Typically, daily trade volumes need to exceed $1 billion for there to be any sustained price appreciation.

A popular crypto trader by the name of PlanB took to Twitter on Wednesday to share his evolving view of the bitcoin halving. Based on his tweet, bitcoin’s upcoming halving event has been priced into the market, which means traders should temper their expectations about a possible price surge once the block reward is halved.