Sideway trends for bitcoin often end with sales, which was confirmed this time as well. On the weekend, Bitcoin made a deceptive leap above $7,100, where it faced stiff resistance. At the beginning of the working week, Bitcoin is losing 2% to $6,700. The Crypto Fear & Greed Index continued to decline, falling another 9 points from last week, remaining in “extreme fear” zone for a month. Altcoins follow the benchmark cryptocurrency, but not all alternative digital currencies show a decline on the weekly chart. Tezos (XTZ) showed almost 12% growth over the week, Chainlink (LINK) +43%, Bitcoin Gold (BTG) +27%. One of the most affected cryptocurrencies over the week is Bitcoin Cash (BCH), which showed a decline of 8.5%. This is the result of halving for the first fork of Bitcoin. In addition to the price decline, there was the drawdown of the hash rate. If it was a rehearsal of the benchmark coin’s halving, then such results make us think about this event from the negative side.

The Bitcoin lost 5% in 7 days. Despite this, some well-known analysts are still expecting $20K this year. Among them is Arthur Hayes, head of BitMex crypto exchange, who, however, also admits the possibility of re-testing $3K. He believes that the main reason for the favourable scenario is the policy of central banks. It turns out that we are already in a transition period, during which only physical gold and Bitcoin will survive. Time will show whether this is the case, but we can assume that central banks and governments won’t give up their monetary power. 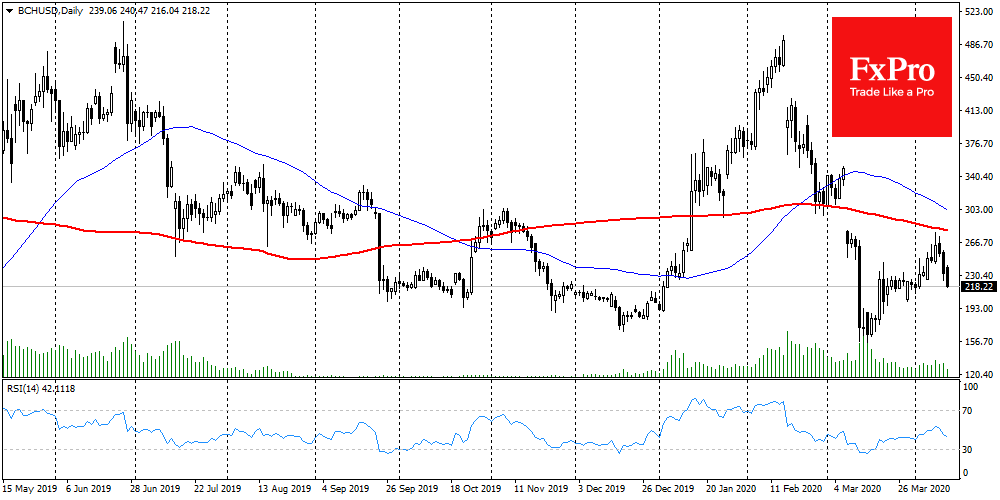 A year ago, the crypto market began to recover from “crypto winter”. Bitcoin was still 32% above its levels a year ago. Bitcoin’s third halving is a month away. Previously, market participants had high hopes for this event, but the experience of Bitcoin Cash and Litecoin showed that everything might go wrong. However, even if the short-term effect is negative, it does not mean that we won’t see new highs in the next few years.