Home › Crypto Review › SEC stopped Libra and Gram, but what about China?

SEC stopped Libra and Gram, but what about China?

Bitcoin treading waters around the $8K threshold: investors are tired of waiting for a rebound and playing tug-of-war. Bears are set to open champagne if Bitcoin breaks below support at $7,800, where BTCUSD has been unfolding to growth since late September. The altcoins duplicate the dynamics of Bitcoin without any bright emotions among investors.

Company Grayscale Investments reported a very successful quarter. The inflow of investors’ funds amounted to $254.9 mln., which is almost three times more than in the previous quarter. Importantly, 84% of investors are institutional, and 67% of funds invested in Bitcoin. On the one hand, there is institutional interest in the asset. On the other, the hash-rate of the Bitcoin network is close to its historical maximum, lacking only positive news and retail demand. 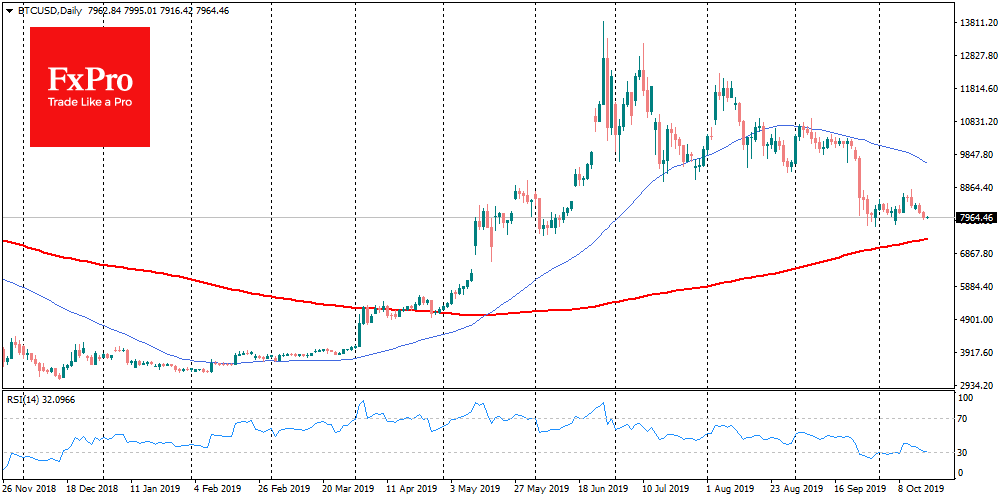 The current price dynamics cause unpleasant fatigue among market participants. The bullish impulse has dried up, but the hopes are still there. One cannot exclude the appearance of the “black swan” on the crypto market, but it is hard to bet on them. So far, all events, including Bakkt, Libra and Telegram, have not only failed to increase optimism but have also darkened clouds over the cryptocurrencies’ future. Regulators have clearly shown that they will not give way to significant projects that involve considerable money and influential IT companies.

Libra’s management continues to bend its line, saying that the project is “too big to quit”. Libra believes that the withdrawal of the Visa, MasterCard and PayPal projects will only delay the launch of the project. Optimists still believe that SEC will not be able to make everyone leave the project.

Perhaps Libra’s mistakes will be taken into account in Telegram, given that GRAM has no such firepower as Facebook. Limited budgets usually lead to more witty solutions.

Another “black swan” of the crypto market could be the Central Bank of China. It would seem that it is difficult to find a more conservative financial structure, but China has always had a grudge against the dollar as a global reserve currency. The Chinese cryptocurrency, pegged to the renminbi, could become another point of contention in the trade war of the world’s major economies. It is likely that together with the bans on ICO and crypto exchanges in 2017, the PBC began an active phase of development of its digital currency analogue. If China fails to make the yuan the leading global reserve “paper” currency, Beijing may try to grasp a place in the world of digital national currencies. The vast Chinese market will allow to test the technology domestically, while no one will be able to close the global Internet gateways afterwards.