Bitcoin spent most of Wednesday in a shallow corrective mode, pulling back to $22.3K. However, with the start of active trading in New York, optimism returned to the equity markets, pushing BTC to $23.7K by the end of the regular session. We saw renewed pressure and a pullback to the $23.0K level on Thursday morning.

Yesterday’s decline can be seen as a technical correction from the momentum from January 19th, paving the way to $25.0K. However, it is more likely that the renewal of the six-month highs was a false breakout, as trading has been predominantly in the $22.7-23.3K range since Saturday, reflecting the continued profit-taking.

The cryptocurrency’s market cap has returned to the $1.05 billion level, where it has spent most of its time since January 21st.

Twitter analyst Trader_J called bitcoin’s continued rise a manipulation. He speculates that most of the BTC in the current rally has been bought using BUSD, Binance stablecoin.

South Korean authorities have issued an arrest warrant for the head of the country’s second-largest cryptocurrency exchange, Bithumb, who is accused of manipulating the share prices of the exchange’s subsidiaries and embezzlement.

According to SEC Commissioner Hester Pearce, participants in the cryptocurrency community and regulators should learn from the problems faced by the crypto industry in 2022. However, she noted that the challenges faced could be beneficial in the future.

Attorney John Deaton, who represents XRP owners, said a final hearing on the LBRY platform would occur in New Hampshire on 30 January. The event, he said, is significant for the industry: a final victory for the SEC would mean that all secondary market transactions in digital assets could be deemed illegal in the US. 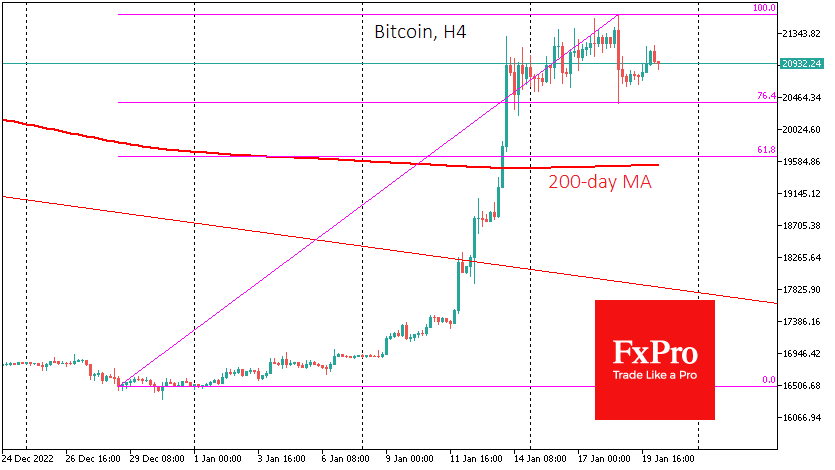 Maybe the short-time correction for Crypto is over