Home › Crypto Review › Buyers are squeezed out of the crypto market

Buyers are squeezed out of the crypto market

Bitcoin has difficulties with recovering above $10K, starting to slip in the range of $9,400 to $9,800. It means that there is more and more probability of decline at least to the next round level by $9K. But a continuation of the decrease can attract new sellers, and correction can strengthen.

The struggle for the 50-day moving average leads more and more steadily to the victory of the bears, which also speaks in favour of the decline. The maximum pessimistic forecast points to $6,700, but in case of a drop to such a low minimum, the force of rebound can be very impressive, as the market will attract not only large buyers but also all those investors who missed the opportunity to invest in Bitcoin before reaching $14K. On Sunday, July 28, Bitcoin collapsed by almost $400 in a matter of minutes and began to recover as quickly as dropped. Market participants suspect “whales” of manipulation. Judging by the sharp local bursts of trading activity, they force other market participants to open short positions and start to buy at the same time, which leads to closing positions with losses. The market size is relatively small, while a significant share of all generated Bitcoins belongs to a small group of people who can create price waves of the right size if desired.

Chinese Libra The news about Libra has resumed discussion of cryptocurrency issues in the Central Bank of China (PBOC). The country’s authorities, similarly to their American counterparts, hold the position that corporate cryptocurrencies create risks for the financial system. What does this mean in the Chinese context? They are developing their own cryptocurrency, as they did with all the services that were blocked. The head of the PBOC’s research department, Wang Xin, hinted at this, and for sure with the prospect of the emergence of Libra, this process will be accelerated.

LTC: rising production costs without price growth? There are only a few days left before the Litecoin (LTC) halving but the fourth largest cryptocurrency still feels no better than the rest of the market. Moreover, the cryptocurrency declined by 30% in a month. If the bursts of growth do not happen, it may cast a shadow on the forthcoming next year’s halving of Bitcoin. Market participants are fully aware that in the current realities, halving can only mean a rise of the mining cost without actually having a positive impact on the value of the asset. 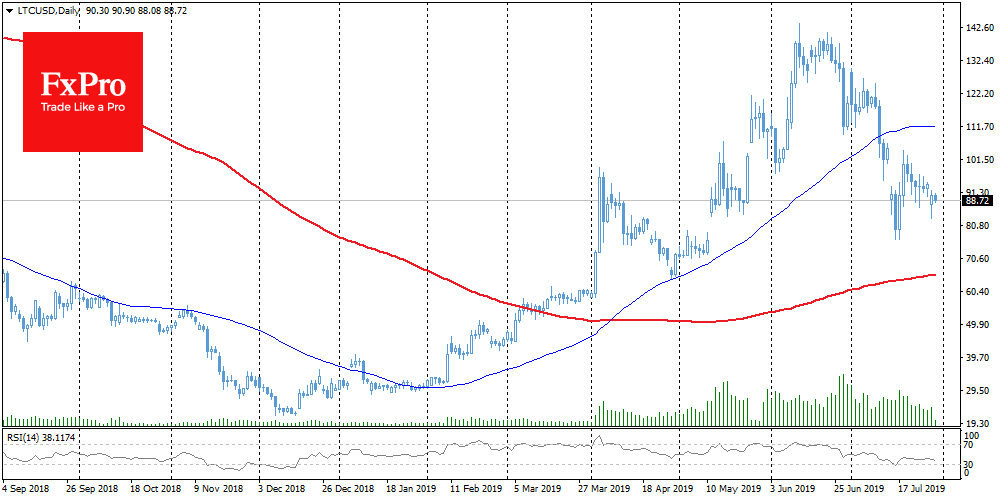