BTCC head Bobby Lee waits for Bitcoin for $1 million in 9 years due to the unwise policy of central banks, as well as due to demand on “digital gold”. But this is then, and for now, Bitcoin is unable to hold even above $9K. As a result, at the beginning of the week, it declined to $8,800, under the 50-day moving average. According to technical analysis, the next major stop for this downward move may be the $7,700-$7,800 area, where the 200-day average passes. Earlier last month it managed to stop the sell-off.

Generally speaking, since July the benchmark cryptocurrency has been experiencing obvious difficulties with growth. The protracted sideways trends often end with a decline. Bitcoin could use the support of faithful buyers right now, as “to the Moon” forecasts alone are not sufficient at the moment. The problem is that the real supporters of the cryptocurrency have already bought it and kept it, and crypto-enthusiasts no longer create new waves. 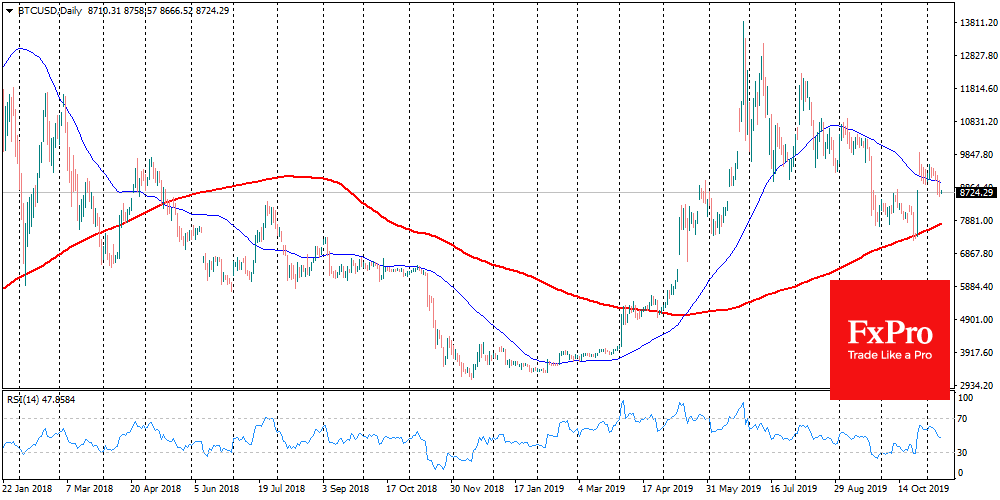 If you look deeper into the enthusiasts themselves, then most of their success stories begin with a thriving investment and end with a flourishing sale of part or all of the crypto-assets, which allowed to open a business in the real world. In this context, it turns out that there are no “alpha enthusiasts” in the crypto sector, but only long holders. The Winklevoss brothers could attributed to the fundamental core of Bitcoin activists. Still, even in their case, no one knows precisely, where they are demonstrating their real intentions and where the marketing moves are.

It is noteworthy that against the background of another rollback of Bitcoin from $9K, the volume of trade of deliverable futures on Bakkt increased up to $15.5 million. On the one hand, we are glad to see the new successes of the platform. On the other hand, it is another reason to think about the intentions of institutional players in this sector.

However, the U.S. government is not going to stop at a few participants, as the CFTC issued permission to launch the platform Tassat, which will provide institutional investors with the opportunity to trade cryptocurrencies derivatives. The launch of such projects may call into question the optimistic hopes of the head of BTCC.

While everybody is waiting for Bitcoin halving in 2020, some of the leading altcoins are soon preparing for hardforks, which may affect their prices in the long run. Creators of Ethereum are going to hold hardfork “Istanbul” on December 4, 2019. Whereas already on November 30 it is planned hardfork of Monero. Given the tendency of the crypto community to look for a reason to shop in after any news, these events are quite worthy of becoming catalysts for prices. Besides, the traditional stock market is at its maximum, causing questions of close sale-off. If it happens, there is a chance that some funds will move to crypto-assets, maintaining the hype.