After another stage of a tug-of-war between bulls and bears, Bitcoin showed a growth of 1% above $8,900 on Thursday morning. The increase above $9K, which was once a support level, may attract new buyers to the asset.

Conversely, a drop below $8K would trigger a stronger sell-off. The 200-day moving average was broken through on February 26, playing now on the bears’ side. The further dip below the 50-day moving average (currently around $8K) might begin the new step of the slide. There is a feeling that investors for Bitcoin are waiting for the solution of coronavirus problems and further moves of central banks. 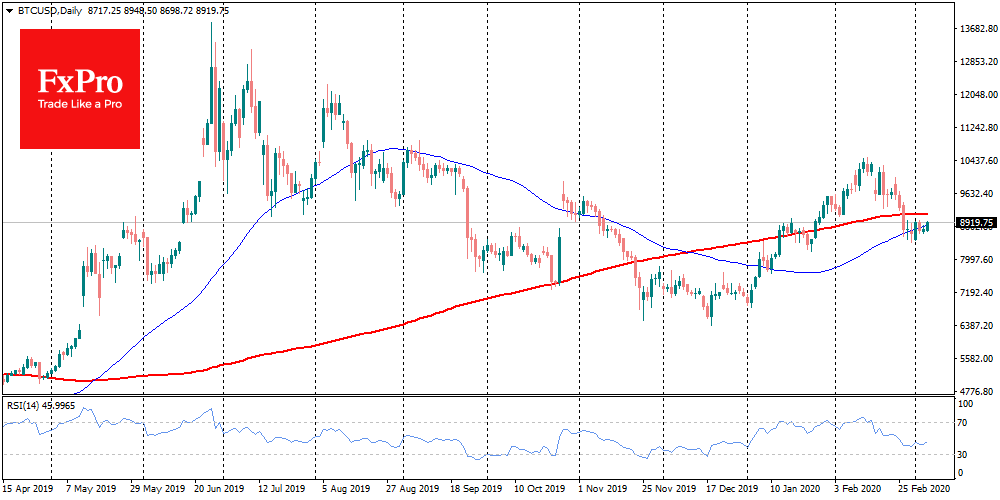 It is an easing of monetary policy, that is believed in the crypto community to be capable of increasing demand for cryptocurrencies. The larger the money supply, the lower the rates and the cheaper the national currencies, the higher the demand for deficit assets with a limited emission, to which market participants attribute Bitcoin. Whether that’s true, time will tell. However, apart from the actions of central banks, several other factors together determine the direction of the crypto market.

While crypto market participants are looking for growth triggers, Tether has launched a gold-backed stablecoin. This was the logical next step for the company because there was a high demand for gold-backing in the community. In such a turbulent time, the ability to bound a digital asset to a physical asset continues to influence mass consciousness positively. Shortly, we will see the launch of other similar projects. The stablecoin market is slowly but surely gaining popularity, and it is unlikely that there is a more convenient tool for transferring funds at the moment if non-speculative interest is being pursued. Fluctuations of the XRP price do not allow the project to reach a new level of integration with the banking system, while a stable rate would undoubtedly change the situation.

Probable issues with the epidemic also lead to disruption of remittances in traditional systems, including Western Union. This factor could also play into the hands of stablecoins and even highly volatile cryptocurrencies. Destroying supply chains, bankruptcies of companies, lack of components for production, declining demand for commodities – all these have the potential to stimulate the shadow economy and capital flight. In this background, the Chinese can recall the convenience of digital currencies.

The news from India that the court lifted its ban from banks on working with crypto companies could be another price trigger. It is a huge market with high potential demand for digital currencies. As is often the case, it is much more comfortable in developing countries to introduce new technologies if the old ones are not sufficiently rooted.