Bitcoin’s way to the lows or Frustration in crypto

No matter how much the experts warn about the probable decline of Bitcoin, sharp drops still cause shock waves. On Thursday evening, Bitcoin declined to $7,700, temporarily attracting buyers at these levels and returning to $8,000. However, the rebound failed to develop. Probably, the current levels still look as high for those who want to enter the market closer to the bottom of the correction.

As for the technical analysis, the break-down of the support by $9,300 turned out to be a natural closing of long positions, which sent Bitcoin in search of the bottom. The next stop may now be in the $7,000 area, through which the 200-day moving average is currently passing. The BTCUSD is in the oversold territory for the first time since December 2018 as RSI declined to 23. Then, in December last year, the growth of this index above 30 marked a rebound from the local lows, although the bulls had to wait another month and a half for a full-fledged rally. 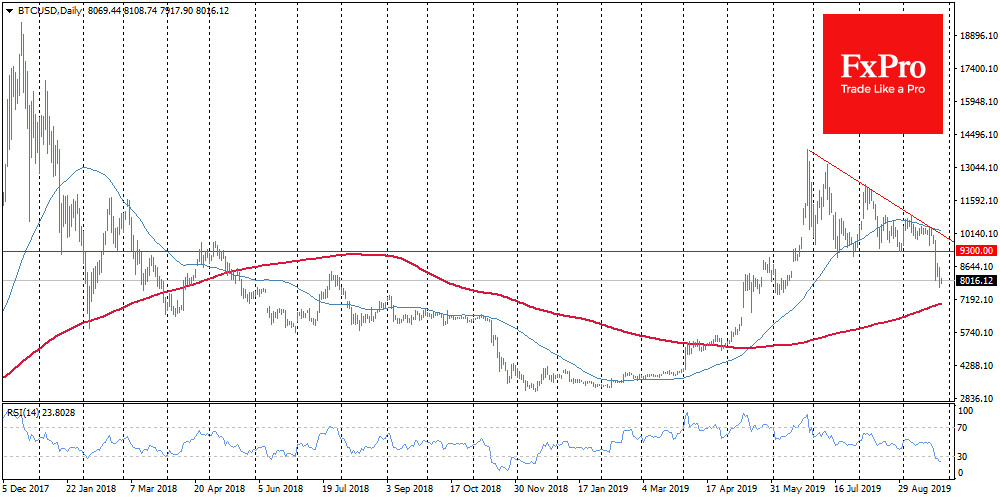 Among the reasons for yesterday’s decline is the liquidation of long positions by $77 million on the BitMEX crypto exchange within a few hours. Whereas on September 25, long positions were liquidated by more than $650 million. These are not the primary triggers, but such closing of positions shifts the fragile balance in favour of sellers.

The Bitcoin dominance index has slightly decreased to 67.8%, but this indicator is not so important now, given the general “blood bath” for all cryptocurrencies at once. The fear and greed index dipped to 12 on Thursday, shows “extreme fear”. According to this index, at such moments, there is an excellent opportunity to buy an asset. However, as we can see, the current levels are not attracted buyers yet.

The official launch of the delivery futures from Bakkt coincided with the collapse of the market, although the volumes did not reach the forecasts. It is the second time that the market got a slam after such events. 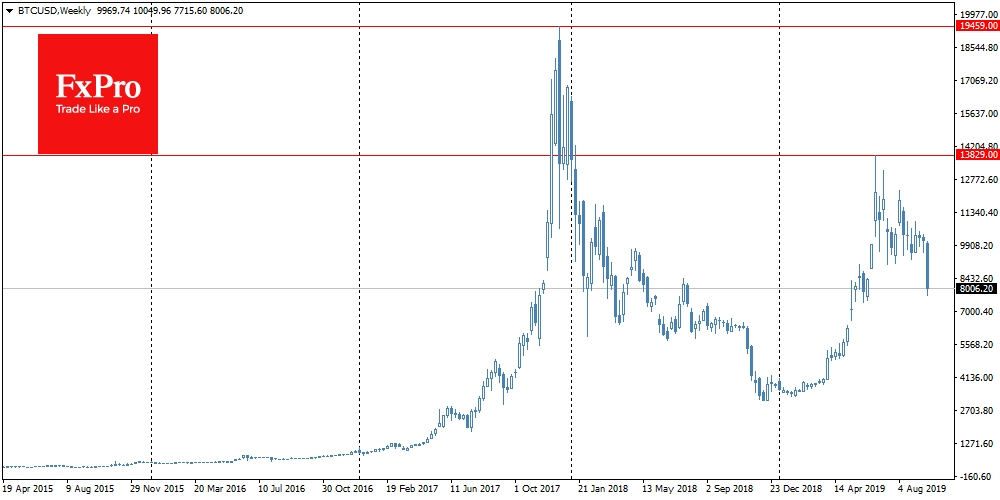 In a broader perspective, we should think about the following: what if now we see a regression of the highs of Bitcoin and the whole market of cryptocurrencies in general? $20K in 2017, $14K earlier this year. Is this the flight to the Moon that crypto-enthusiasts dreamed of at the beginning? How long will miners be ready to hold on to the mined cryptocurrencies, working at a loss?

One should hardly expect a flash collapse of hopes of a scattered and weak (by financial standards) crowd of investors. Most likely, it will be a gradual disappointment, when lower and lower levels of rebound will be perceived as suitable for sale to gain something.