In the last 24 hours, Bitcoin little changed, standing near $5300 (-0.6%). Market participants are in the process of analyzing what happened. It can hardly be called a typical situation when the daily trading volume in the Bitcoin network (according to the CMC data) reaches almost $80 bln. By comparison, at the moment when the historic price peak at $20K in December 2017, the daily trading volume reached $23 bln. This tells us about the global changes in the crypto market.

Not surprisingly, as analysis shows that more than 160K BTC moved to exchanges on March 13, which was the most substantial one-day increase since November 2017. Moreover, 281K Bitcoins, which had been untouched for 30 days, returned into circulation on March 11. The market is now tormented by the question of whether it is time to buy digital currencies. Still, the sideways price trend indicate a high level of uncertainty in the prospects, which pushes off any further investment plans.

The Crypto Fear & Greed Index grew by 3 points over the past 24 hours, but still in the “extreme fear” zone. As for cryptocurrencies, stablecoins have become safe-heaven here. And this can be considered a considerable achievement of the digital market, as it is tough to find such an asset in the traditional one. 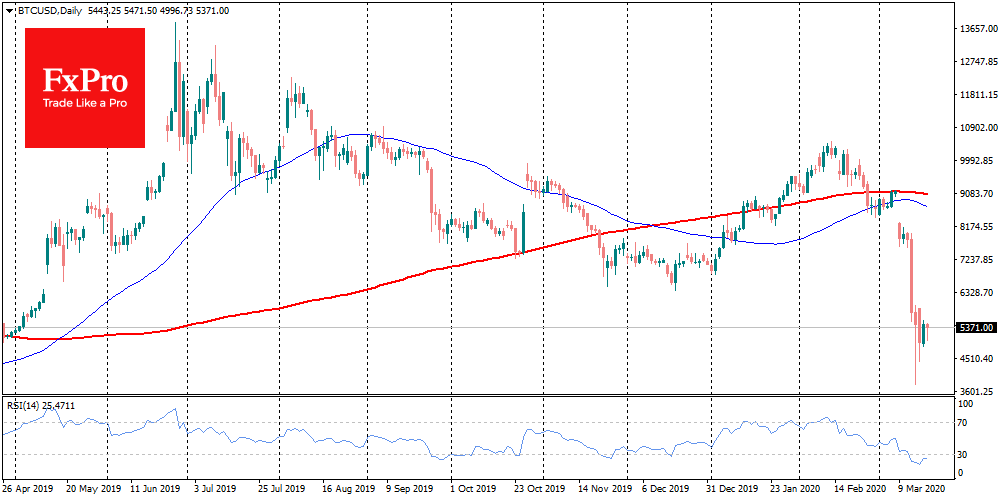